When I was writing this post about Kensuke Tanaka's inability to play shortstop, I referenced Buster Posey's past career as a shortstop. It seems so surreal, the idea of Posey ranging deep into hole and firing the ball across the diamond. It almost seems like the game of baseball started with pitchers chucking balls to the backstop for a hundred years, but then Buster Posey showed up and said, "Hold on, fellas. I have a better idea."

He was also a closer. Mild-mannered Buster Posey, America's greatest hero, was also a ninth-inning option for Florida State University. Yet when you searched for "buster posey pitching" at YouTube, you didn't get anything showing Posey pitching. Instead, you got this David Cronenberg-like, backwards, skewed, censor-avoiding video in which Buster Posey randomly falls down. Which … okay. You can't get a video of the time Andres Galarraga almost hit the Coke bottle with a homer to left-center, but here's Posey falling down in a 14-degree-angled mirror.

On a lark, I e-mailed FSU to see if they could rustle up some video of Posey getting a save. They responded right away, which was mighty gracious of them, and while it's not exactly the kind of video that you would use to break down a pitcher before the amateur draft, it at least gives us a brief glimpse of what Posey was like as a closer. Behold:

It's unbelievably odd to see Posey stomping around the mound, tugging his cap, looking like a pitcher ready to come to the plate. Which is exactly what he was. And apparently, he had a full complement of pitches.

What's he gonna do now? Breaking bawl? Fastbawl? Change up?

The fastball touched the mid-90s according to Baseball America. Posey's post-save stance is very closer-like: 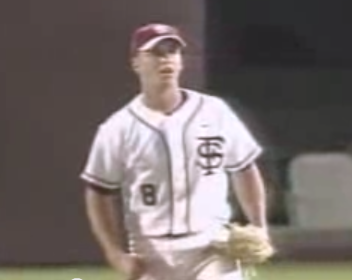 Try this: Stand in a doorway, and use both of your arms to push against the frame as hard as you can for 30 seconds. Then let your arms fall to your side, and see what happens. The arms will lift up and away from your hips, whether you want them to or not. Now you have closer arms. Posey's arms couldn't touch his sides if he wanted them to. They're levitating away from his body, fists clenched in an unintentional mock-tough-guy pose. He also yelled a lot after his saves. I don't remember him yelling a lot as a catcher. This suggests he's a positional chameleon, adaptable to any situation.

So what does the alternate universe look like? How would a closer win two World Series for his team? You know Posey would have done it. But would he have done it on the mound, or would it have been as a Micah Owings-style pinch-hitter? Maybe one of each?

The footage is far from perfect, but that almost gives it a mysterious, Bigfoot vibe. Did you know that Buster Posey was a closer? Of course you did. But now if you wanted to see it, here's a video.

Posey's career at FSU was marked by him not having it. It appears this not having it carried over to the mound. He showed 60 not having it there on the 20-to-80 not-having-it scale, but scouts knew he had the potential to max out at the full 80. I'm glad he's a catcher, but if he gets bored winning award after award after trophy after trophy, at least his options are open.

Thanks to Florida State University for digging up the footage. One of us should probably have a star athlete for a kid and send him or her there as a way of saying thanks.