We had to do this sometime, didn't we? We didn't? Well, too bad, because this is what you're getting.

Share All sharing options for: Giants players as Star Wars characters, Episode I

This year's special event giveaway for Star Wars night at AT&T Park is supposedly a Clone Trooper bobblehead with a removable mask, which reveals Buster Posey. In past years, the Giants have knocked the Star Wars Day giveaway out of the park (baseball term). They encased Brian Wilson in carbonite, which is the only way to keep him from pitching through an injury and also the only way to keep him quiet for more than 10 seconds at a time. Then they gave away a Death Star baseball, which combines everyone's two favorite things: baseball, and the firepower to destroy Alderaan.

This year, however, the giveaway is just plain wrong. Oh, don't misunderstand me; I'm going to pay top dollar on eBay for the right to put that hunk of resin on my bookcase. But Buster as a Clone Trooper? OUR Buster? For shame, marketing department. For shame.

But it set me to thinking and/or burying the lede: what WOULD be the perfect Star Wars universe representation of Buster Posey? Well, that one of course is readily obvious, as we shall see in just a moment. But how would we depict the REST of the Giants roster via the medium of Star Wars? WELL I'M GLAD YOU ASKED. Because I have once again teamed up with resident GIF expert and image specialist Clay Wendler to bring you the definitive San Francisco Giants-as-Star Wars character column that absolutely no one (especially Grant) asked for. With minimum further ado, here is part one of this epic journey, featuring the position players. Episode II: The Pitcher Wars can be found here.

Let us begin with the obvious, shall we? 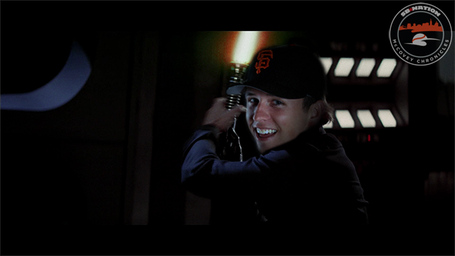 The only difference between Buster and Luke is that Buster is better in every way. He even suffered a gnarlier injury in his second movie! You'll never hear our beloved Buster whining about wanting to go to Tosche Station to pick up power converters. Nope. He's a Luke Skywalker you can root for, dang it.

But who shall shepherd our hero across galaxies and into the dark heart of the Empire? Who could be roguishly dashing and suave enough to not give a single flying frig about the danger that lies ahead? WHO?

I'll tell you who. 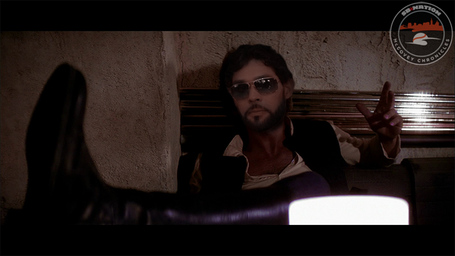 You're god damn skippy he is.

Look at that. LOOK AT THAT. Now that is a scruffy-looking nerf-herder of the highest order. By which we mean "sploosh." He flew the Triples Run in wayyyyy less than 12 parsecs and believe you me, he never shoots first. If you follow me.

And yeah; he knows. 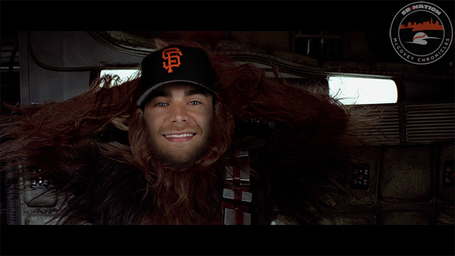 There's only one character in the Star Wars universe whose locks are as luxuriant as that of our dear Crawdaddy. Although Crawford is (ever-so-slightly) more articulate than Chewie, they are both adept at slinging bolts. All the rest of my jokes are really just variations of the hair thing so uh

something something let the wookiee win 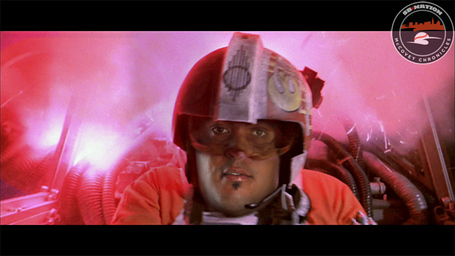 For those of you who may be keeping track and/or expecting it, this is the first of two fat jokes that will appear in this installment. Neither of them involve Jabba the Hutt. I hope that you will be impressed by my restraint and creativity and send me gifts.

Anyway, 80% of all Hector Sanchez plate appearances are similar to Porkins' on-screen time in A New Hope. You see him and you're like "lol wtf a fat X-wing pilot" and then before you know it, he's screaming, flailing and going down in flames. Sure it's sad, but I mean they named him PORKINS. 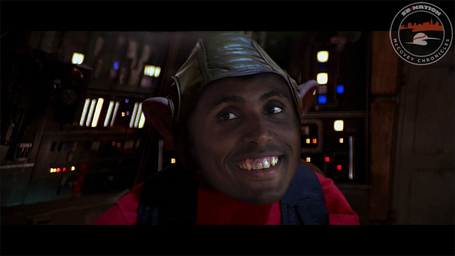 An admirable co-pilot. Someone interesting enough to sit next to Billy Dee for a while. A hero to millions just for having been in the room while something historical happened. That's pretty much Joaquin Arias! He's not quite as jowl-y as Nien Nunb, but it is my hope that by making this connection, I somehow turn Kobe Bryant into the Nien Nunb of basketball. Or vice versa. 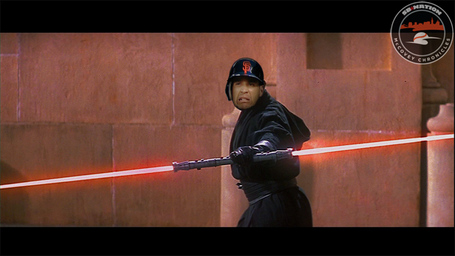 He shows up and you're like, "Oh man, where did this guy come from?! He's amazing!" Looks totally bad-ass, does a ton of cool stuff. But before you know it, he's getting chopped in half and falling into a bottomless pit. (There are so many bottomless pits in Star Wars!) Okay, so it's not a perfect analogy, but let's hope that this year Blanco comes back with some robot legs and wrecks shop like you always expected Darth Maul to. 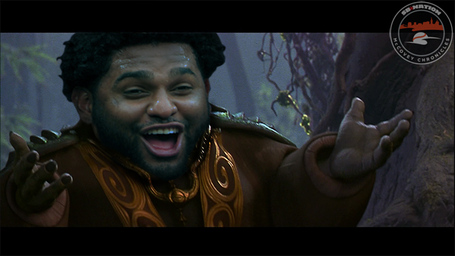 Annnnnd here's fat joke number two. Pablo gets Boss Nass because Pablo doesn't really fit neatly into any Star Wars character. But Boss Nass (although annoying) is ultimately a benevolent facilitator! Without Boss Nass, Naboo falls! Maybe Naboo fell anyway? I dunno, all that blockade stuff is dumb and confusing. You know what else is dumb? Jokes about Pablo being fat!

I'm sorry, everyone. I'm so sorry. 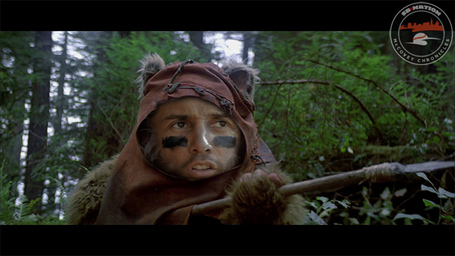 Everyone makes a lot of fuss about the Ewoks, but let's face it: they're adorable! They're teddy bears who live in the woods and won't hesitate to absolutely massacre the space-gestapo using vines and snares and bash heads in with adorable, tiny rocks. Then they're clean the blood out of their matted fur and sing a rousing chorus of "Yub Nub" around the funeral pyre.

But Andres Torres is adorable! He's likable and cuddly and he just sprained 14 of his 72 abs while you were reading this. He's the ferocious, murderous teddy bear of the Giants and he just might do something amazing. I mean, he might not be able to help liberate Endor or anything (metaphorically or literally), but whatever he does will be infinitely more watchable than Caravan of Courage. 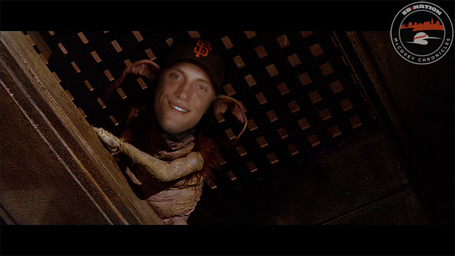 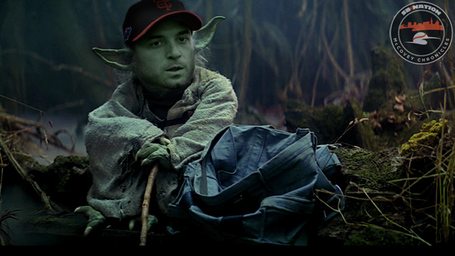 So old. So wise. So much contact. Just as Luke underestimated Yoda by his size, who among us knew that Scutaro would catch fire and turn into the end-of-Episode-II flipping-around-like-a-maniac-clobbering-the-bejesus-out-of-Count-Dooku CGI spectacle, only infinitely cooler? Nobody, that's who.

But in stark opposition to the Star Wars franchise, let's all hope Marco doesn't turn into an immobile puppet this season. 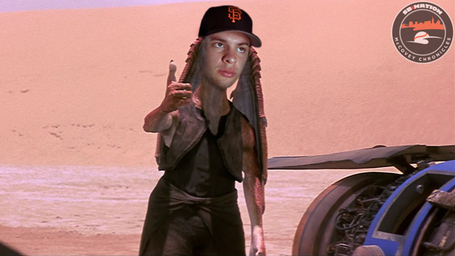 Sorry, but he is. If for appearance, gangliness and general awkwardness if nothing else. And his Twitter jokes are about on par with the average Jar-Jar line. I still love you, Brandon, but you're Jar-Jar. This is just the way it has to be.