The return of Tim Lincecum (for an inning or two)

Tim Lincecum was good, and then he wasn't. Let's get a warm beverage together and pretend not to care.

Share All sharing options for: The return of Tim Lincecum (for an inning or two)

It's always hot in the dream, I remember that much. It's always sticky and muggy. The other certainty is how I'm going to start the post-game thread. "Tim Lincecum Is Back," the headline will read. The opening paragraph will be something about his mechanics -- I think I noticed something different about them. He pitches again, and there it is. No, there's definitely something different. His delivery is much more … underhand. Yeah, that's it. Underhand. He's pitching underhand. And no one can touch him.

"Tim Lincecum Is Back," the headline reads. The rest of it writes itself.

Suddenly, there's a loud ping. And another one. And another one. The bases are loaded, and Lincecum's sweating, sweating, sweating, looking like he just got back from the front row at Sea World. One last ping, and the woman with the ponytail goes back to the fence and runs out of room. It's gone. Ryan Seacrest, Jr. raises his arm in triumph as he rounds the bases, secretly hoping that a walk-off grand slam in the Taco Bell All-Star Legends and Celebrity softball game won't be the highlight of his career. (It will be. Somehow, I know that.) 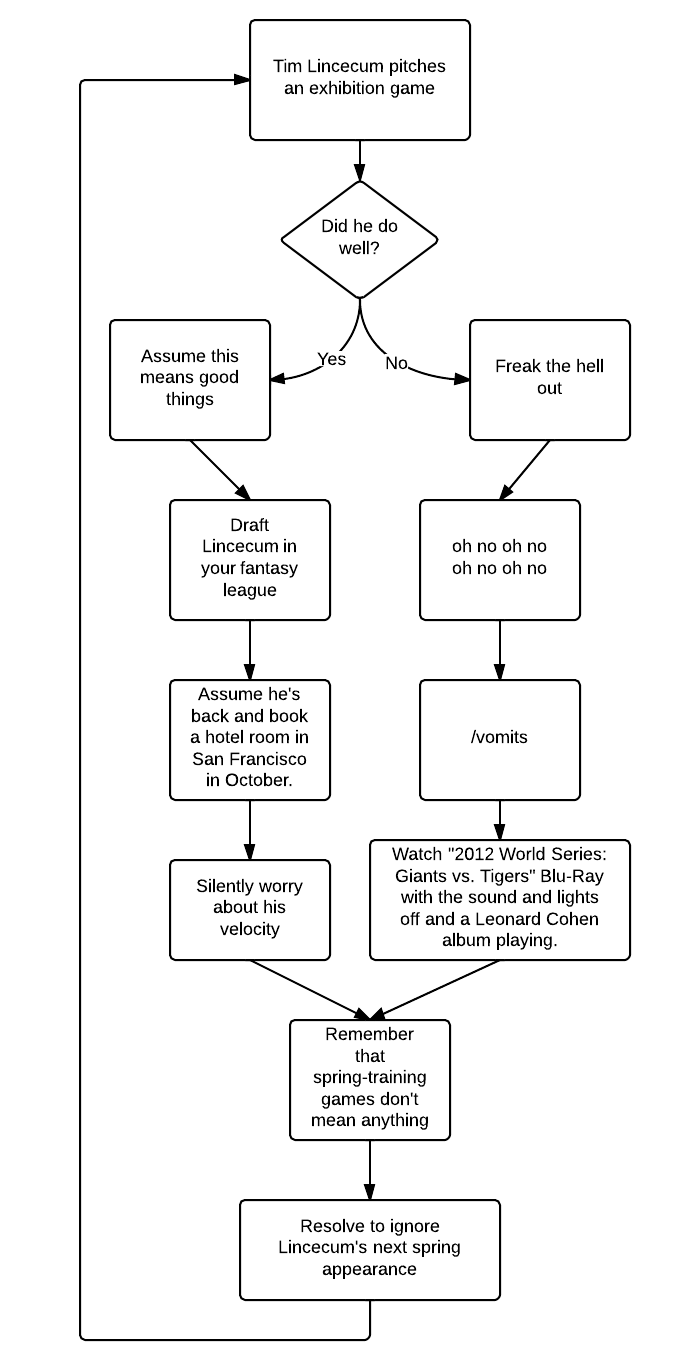 I wasn't really going to write a "Tim Lincecum's Back" post. If anything, I was going to do a "Tim Lincecum's Sweaty" post. And, say, look at that, I worked it in. But for a while, Lincecum looked good. A slow-mo GIF, if you're so inclined. It was either slow-motion or Benny Hill with the GIFs tonight, so I apologize. Hey, it's spring training for the content thieves, too.

There was a familiar pattern to the outing, though. Lincecum started off throwing 93, looking nasty. Then his command slipped, he walked a batter, his velocity dipped a bit, and he started leaving pitches over the plate. Mark Kotsay -- whom you might remember as the answer to the famous riddle, "Who is buried in Kotsay's Tomb?" -- ripped a triple against Lincecum. Absolutely ripped it. And it was a pitch that deserved to be hit. It was the kind of outing that made you think of the playoffs and World Series. The Return of the Super-Reliever. What a weapon!

Then you slap yourself repeatedly because you're PAYING ATTENTION TO SPRING-TRAINING GAMES AGAIN. They mean nothing. Remember when Lincecum was getting slapped around last March, and everyone was worried? Exactly.

(Seriously, though, it was nice to see Lincecum's curveball working well occasionally. It wasn't a particularly helpful pitch for him last year. He was buckling knees tonight.)

Kensuke Tanaka was involved in three defensive plays on the night

1. Charged a chopper on the first play of the game, throwing the ball wide of first for an error.

2. Fielded a double-play grounder cleanly a couple pitches later and gently shoveled the feed to Brandon Crawford as if it were a Faberge egg filled with plutonium.

3. Charged a slow roller, sextuple-clutched, and still threw wide of first, but Buster Posey stretched out to get it. Also, Freddy Garcia was running, and he was six feet from the batter's box.

Small samples abound. Except ... well, you have to evaluate the guy on something, right? And the buzz coming into the game was that Tanaka's defense was rough, to put it charitably. On Monday, he looked beyond rough. He was another error away from the crowd chanting, "We want Huff!"

If I were a betting man, I'd put money on Tony Abreu or Wilson Valdez before Tanaka for the last spot. Actually, I am a betting man, but I'll need you to spot me a $20.