This one really was important! To me. So thanks for the closure, MLB.com.

It's Crushing Disappointment Week on McCovey Chronicles, when we highlight all of the times sports made us sad in our lives! We'll start by remembering Scott Spiezio through the magic of song:

I made it 24 seconds! How long did you make it? The important thing is that if you clicked on it, you feel stupid.

It's actually not Crushing Disappointment Week around here, but I found something that would qualify for it. I've been looking and looking for this for years, and MLB has finally uploaded it to their site. But first, a little background:

I was goofy for baseball back in 2000. Like ... goofy. My life revolves around baseball now. It's literally my job to watch 162 games every year and then think about them for hours afterward. But even considering that, I still look back at how I was in 2000 and think, "Man, that dude was a little too into baseball."

When J.T. Snow hit his home run in 2000, I was there in the left-field bleachers. The only thing that remotely compares to the sports-related euphoria that I've experienced at a live sporting event is Young-to-Owens. It was bananers. Everyone jumping up and down, acting the fool. I didn't think the Giants were going to win the World Series at that point, I felt it.

There was but one problem. The homer tied the game. It didn't win the game. And the Mets came back to win. Trudging out of that ballpark was one of the saddest experiences I've ever had as a baseball fan, and it was only recently that I've started to appreciate the Snow homer for the brilliant moment in time it was.

Okay, on to the point of the post. Between Snow's homer and the Mets' win, there was a rally. Armando Rios led the 10th off with a single, and suddenly Bobby Valentine thought, whoa, whoa, whoa, maybe I should get Armando Benitez out of the game. He did, which set up a sweet, sweet Dusty Baker bunt, which set up a stupid baserunning blunder by Rios ... long story short, Barry Bonds was up as the winning run, with the tying run on first.

This was before Bonds was just one of the greatest hitters in baseball, not one of the top three all-time. So it was actually normal for a left-hander like John Franco to pitch to him in a situation like that.

The game ended when Bonds was called out on strikes. And for years, here's what I thought happened: 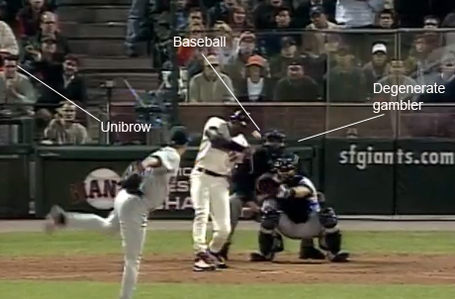 But with this newfangled video technology, we can see what really happened: 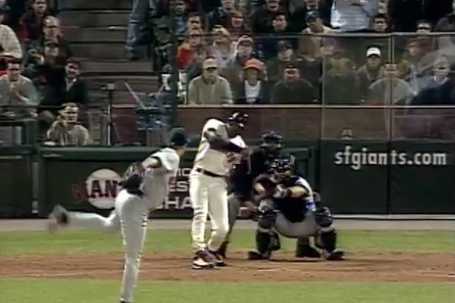 It was close, and you can't tell definitively from that angle. But it was a heckuva pitch in that situation, and you can't get irate at Gary Cederstrom for calling it a strike. Which kind of ruins the narrative that was in my head about what happened in the game. But for some reason, I feel better now.

There will be more videos uploaded to MLB.com soon, it looks like. They're going through the archives. That's probably the best news of the offseason, really. And this time they got one of the videos I would have paid to see. Turns out that it wasn't the worst call in the world, 23-year-old Grant. You should probably stop dipping your quill in the inkwell filled with blood and throw the letter away.