Chris Carpenter's injury and the 2012 Giants

Share All sharing options for: Chris Carpenter's injury and the 2012 Giants

Other than that, I'm doing okay.

It turns out that Tony Abreu and Ramon Ramirez news isn't enough to get my mind off of all this! Funny, that. But I've taken a lot of time over the last couple days to think about championships. More specifically, the fleeting nature of championships. How easy they are to take for granted. How imperceptibly lucky every championship team usually is.

Here's how close the Giants were to losing the NLDS: 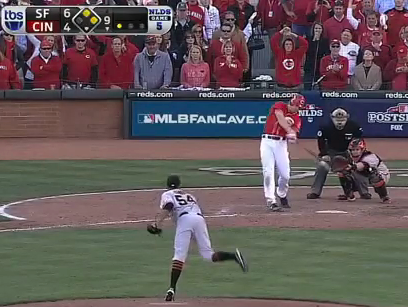 That was just the first pitch of the 12-pitch at-bat, too. Hitting is such a reactive thing, I'm not sure if Bruce could even explain the difference between that swing and a home run. It wasn't a flaw in his technique, other than "The bat should have crossed the plate here, not there." And because the bat wasn't there, the Giants won the World Series.

Now that I think about it, I should probably do a post that focuses on the Bruce at-bat, which was the postseason encounter that probably made my hair fall out the most. But today's example of "look how many things had to come together" for the 2012 World Series Champs is Chris Carpenter.

Carpenter lost twice in the National League Championship series, giving up 10 runs in eight innings. Carpenter is unlikely to ever pitch again. These two things are almost certainly related. This was a pitch that Carpenter intentionally threw to the hottest hitter alive:

A hanging sinker. It was like a pitch that Scutaro would have ordered out of a SkyMall catalog, hanging and waiting for him to turn on it. And it's not the kind of pitch that will have made Carpenter about $100 million by the time he retires next year. Carpenter was better than that, one of the most fearsome pitchers in the league (when healthy) for years. But it's the parenthetical that's the important part, there. When healthy. Carpenter wasn't healthy when he started Game 2 and Game 6 against Ryan Vogelsong and the Giants. At least, not entirely.

He had the same surgery that ended Noah Lowry's career, which also led to this creepy screenshot: 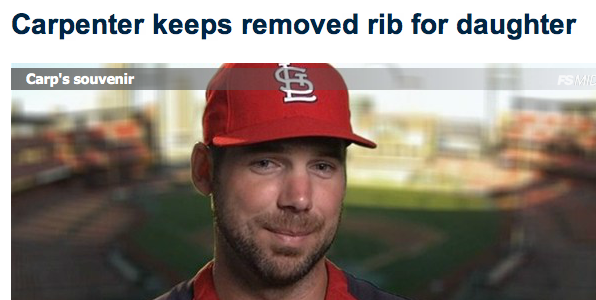 Mmmm. Ribs. And if I had to paint the wry smile of a man who had just given his own rib to his daughter, well, couldn't do better than that. In 500 years, no one would care about Mona Lisa's smile; they'd be decoding that one.

There was no guarantee that Carpenter would pitch again after the surgery, but he was back three months later. And in order for the Giants to win the World Series he had to be:

1. Healthy enough to convince the coaches that he could pitch, and pitch at a high level

2. Hurt enough to hang sinkers like they stole cattle

Please, please, please don't take this as a post that translates to "Yay! I'm so happy Chris Carpenter was really, really hurt!" Not at all. This is just one more example of the confluence of factors that came together for the 2012 Giants, and how ridiculous it was that it all happened just two seasons after 2010. It's why as a greying man, I'm starting to look less harshly at once-goats like Felix Rodriguez, Cody Ransom, and Jose Cruz, Jr. They were just caught in a maelstrom of events we can spend decades cataloging.

For the Giants to come back from a 3-1 deficit against a team that had previously sneezed magic dust all over the playoffs, there needed to be a lot of funkiness. An ace unknowingly pitching the last game of his career is one of those funky things that make you realize how fleeting this all is.

When I read the Carpenter news, my heart sank -- I mean, he's kind of a redass, but I can't stand it when any player has to stop playing baseball because their body is done before the mind is. But the news also put me in a weird, contemplative mood because sometimes McCovey hits it three feet higher, and you have no idea how it really happened.