How will Hunter Pence do for the 2013 San Francisco Giants?

Welcome to the opening of Community Projection season! Some of you love it, some of you hate it. Really, it's just an excuse to talk about a player before the season starts. No one really cares about your projections. Nobody cares about my projections. The important thing is to get a general feeling of who we're expecting to thrive or stink, and that we know what stats to cherry-pick when we don't want to admit we're wrong.

First up: Hunter Pence. Hunter Pence is in the best shape of his life! No, really. SFG Productions followed Pence around while he shopped, talking to him about what he ate.

And a productive Pence would be so, so, so nice. It would be a drag at the end of the season because there would be a chance of the Giants paying far too much for him, but during the season, it would be most welcome. Pence doesn't turn 30 until April, remember. Make all the morbid Aaron Rowand comparisons that you want, but note that Rowand didn't become completely incompetent until he was 32. If the Pence we saw in the second half is the player we should expect, that would be an amazingly early collapse for a player who used to be good.

How good? Pick your WAR of choice:

Say, I've always liked those smart fellers over at FanGraphs. I trust them the most in this particular instance for no discernable reason.

But whether Pence is worth two wins or four wins in a typical season, the important point to note is that Pence had his worst season in 2012, without question. No matter which metric you use, you can see that for five seasons, Pence was productive, and then he inexplicably fell into a ditch in his age-29 season. 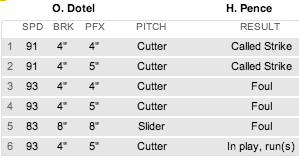 That was in the eighth inning of Game 2, with a runner on third and one out in a 1-0 game. The second run moved the Giants' win probability to 95 percent. It was an important run. And Gerald Laird called for cutter after cutter. Dotel threw a slider about 20 percent of the time in 2012 according to PITCHf/x, so it wasn't like asking Felix Rodriguez to throw a gyroball to Scott Spiezio. Instead, there was one slider, and Pence did well to foul it off.

Whenever there was a slider, though, there was unpleasantness. Pence saw 69 sliders in the 2012 postseason. He took 27 for a ball, fouled nine off, took seven called strikes, put five into play for an out, missed 18 of them, and got a hit on three of them. One of those hits was an infield hit. So, yeah, it probably wasn't a good idea for the Tigers to throw anything other than offspeed stuff with a runner on third and one out.

That's the only Pence we know. That can't be the only Pence that's ever existed, though. It's not like in year five, the league suddenly figured out he couldn't hit a breaking ball. Which leaves us with two options: trend or blip.

If it's any other familiar hitter on Giants teams past and present -- Posey, Sandoval, Freddy Sanchez, Stan Javier, Randy Winn -- who has that kind of sudden evaporation, it would be easier for us to write off as a blip. Good year, good year, good year, good year, great year, bad year isn't a pattern that you'd spend too much time wondering about if it were a familiar player. Bad years happen.

But because Pence was dreadful just about the entire time he was wearing French vanilla or gray, there's a tendency to ignore everything good that came before the second half of 2012.

Stop that. Point is, I'm expecting things from Hunter Pence. Not great things. Maybe not especially good things. But things. Positive things. He should be okay.

(And for as much good-natured fun that we like to have at his expense, it should be noted that he's quickly become one of my favorite Giants. If he can hit, he'll climb the fan-favorite charts quickly.)