Share All sharing options for: The best moments of the San Francisco Giants' 2013 season, part two

Welcome back to another year-end tribute to the worst season of Giants baseball ever. Okay, it wasn't really that bad. There were a lot of neat moments, actually, and a lot of them were played in a beautiful waterfront park. There was a no-hitter. The Padres have never had a no-hitter and their all-time home-run leader is Nate Colbert. Think about what it's like to be those guys.

In the first installment, we looked at five of the best moments of 2013. Here are the top five.

Real talk: This offseason would have been completely unbearable if the Dodgers won the World Series. They'll eventually do it, but there was something about them doing it the first full year they went mechaspend. But that isn't really one of the best Giants-related moments of the year. Look at all those celebrating Cardinals. Gross.

Like the Belt/Sandoval pairing in the last batch, these two are inexorably linked. Here are back-to-back nights back of magic from when you still thought the Giants had a chance to be good. Sigh. Those were the salad days, my friend. And Buster Posey is the avocado.

Lars Ulrich threw out the first pitch that night, too. Seemed important to note that.

Every time Posey came up to the plate at home in the ninth or later with a chance to win the game with a homer, I thought about him hitting that first walk-off homer. It was kind of an obsession of mine, as if him charging the mound for two championships and a perfect game didn't already mark his place in Giants lore.

There it was. And it was against the Dodgers. And, yes, it was good. I quit smoking over a decade ago, so I didn't have a cigarette afterward. But I did bake chocolate-chip cookies right after and sit around with a smug look on my face as the smell permeated the house. Same thing.

Posey's was memorable because he's Posey, but I like this one just as much because a) it was so unexpected, and b) it was the second night in a row the Dodgers had to watch that. So it's a tie, and you'll just have to be happy with that.

Not you, Dodgers. You don't have to be happy with that.

And that's the last we heard from the Dodgers all season.

It feels weird putting this in a best-of. I'm still mad at Paul O'Neill for breaking up Scott Garrelts's no-hitter. Why celebrate Yusmeiro Petit losing a perfect game?

I don't know. But I'll tell you my reaction to this play: smiling disappointment. I was crushed, sure. I wanted the perfect game, and there were obscenities and/or exclamations of disappointment after Pence couldn't quite make the catch. But there was a feeling of getting away with something that whole game. It was like we were all at a garage sale, holding a Honus Wagner card, wondering if we were really going to walk away with it. When Eric Chavez's hit dropped, it was almost cathartic.

Dang, that was close. I can't stop watching just how close. After a century without a perfect game, the Giants almost had two in two seasons, with the last one coming from a minor-league free agent who wasn't even supposed to make the roster.

This one is preferable, of course. Just like with Gregor Blanco's catch in the Cain perfect game, this is where you knew the no-hitter was happening. That was the obligatory awesome play to keep it alive, and the baseball gods could check that item off the list they were keeping during the game.

It also came with a Pence face. 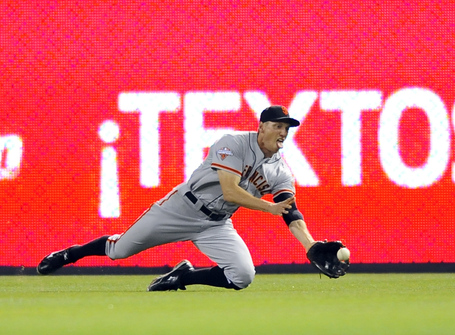 Did you know the Giants have thrown two more no-hitters against the Padres over the last four years than the Padres have had in their entire existence? It's true.

Obviously, this is the Die Hard 2 to Blanco's Die Hard, but that still means it's pretty cool. There but for the non-grace of Pence go no-hitters.

It was impossible to choose the top moment, and I'll explain the decision more after the top slot. But here's Tim Lincecum getting the final out of his no-hitter, ending the four-hour ninth inning.

My favorite part was the magically appearing Buster Posey and the surprise on Lincecum's face when Posey picks him up. You can just see the hate and resentment on their faces, too, which adds layers to the story.

Look at how those two just can't stand each other. I don't know how Bochy keeps order in that clubhouse.

The no-hitter came at the end of yet another confusing, disappointing season for Lincecum. He used to be the golden child, the face of the franchise. His name came up with names like Mays and Montana when discussion the pantheon of San Francisco sports legends. Then he was bad, but not before he got worse.

This no hitter wasn't validating. It didn't cement a legacy that didn't need cementing. It didn't reverse all of the bad pitching in '12 and '13. It just fit, dang it. Tim Lincecum: Won a couple Cy Youngs, won a couple championships, pitched a no-hitter. It's a bullet point that makes sense.

Also, I really enjoyed the earnest Shawon Dunston hug from that video, too. Didn't notice that until now.

In a couple decades, Pagan will be a peripheral figure in the story of the '10s. He'll be Freddie Solomon, warmly remembered, a near-mythic figure for the die-hards and old-timers who were actually living through those seasons, but not the first, second, third, or fourth person you think of. So it was hard to put this ahead of the Lincecum no-hitter.

But as a moment, a single moment of baseball-related entertainment, this is one of my very favorite ever. I've watched, what, 6,000 hours of baseball in my life? That's almost a year-and-a-half straight of 12-hour days spent watching pitches going in and pitches going out. Pagan's inside-the-park homer was as satisfying as anything I've seen outside of the final World Series outs.

The Giants will probably throw a no-hitter again in your lifetime. They could do it next year. It might not be as poignant or warming as the Lincecum no-hitter, but it'll happen. You might not ever see a walk-off inside-the-park homer again, though. And think about how magnificent inside-the-park homers are in the first place. There's that moment where the misplay or carom happens, and you're subconsciously measuring the speed of the player against the distance of the defender to the ball, thinking, say, this has a shot.

To do it in the tenth inning? With the Giants down by a run? Completely transcendent. It's probably a good thing we didn't know Pagan's hamstring filed a restraining order against him as he was rounding third.

This was the game that made me think the Giants were going to win the World Series again, you know.

We're spoiled. To keep pretending '13 was an awful year (which it was) even though it wasn't (except it was) is a luxury that only spoiled fans can have. There were walk-offs. There was a no-hitter. And there was the best walk-off we could ever imagine. It wasn't a great year, but it was crammed with some great stuff. There's some of the greatest stuff.