The best moments of the San Francisco Giants' 2013 season, part one

Share All sharing options for: The best moments of the San Francisco Giants' 2013 season, part one

Here's the first part of a series recounting the most exciting moments for the Giants in 2013. There will be 10 such moments listed, which means if you wanted to list just the walk-offs, you'd have to leave one off. If you go by Win Probability Added, the Pence walk-off from Sept. 29 was the least dramatic. Except it came on the last day of the year, and it was the last run of a furious, unexpected comeback that started in the seventh.

/slaps books out of WPA's hands

Tell your numbers to shut up, nerd.

No, this is an inexact science, and I'm sure I'll screw it up. WPA isn't going to help that much. We're looking for the 10-best moments or plays or events from 2013. It's not enough to say "That game from Madison Bumgarner." It doesn't matter if he shut the Dodgers down for two hits over eight innings, drove in a run, and got Fatburger at two in the morning. We're looking for isolated moments.

It's going to be a two-parter, not because of the clicks, but because I'm a wordy fellow.

Crawford should have won the Gold Glove in 2012. It's kind of a travesty that he didn't. But he wasn't quite the same fielder in 2013. He wasn't bad. He wasn't anything less than an excellent shortstop. But he wasn't as transcendent in 2013 for whatever reason. I figure it's like batting average. When Ichiro hit .303 in 2005, people were like, "Hey, what's up with Ichiro?"

This might be the best play Crawford's ever made, though. Or maybe he's made better plays, but this one stands out because it's much more unusual than the typical range-to-your-right grounder. It was already going to be a tricky, barehanded play, but then the ball changes direction. It's behind Crawford when he grabs it and rifles a perfect throw to first in one fluid motion.

Without double-checking, I can't remember if the Giants won that game. But you watch bad teams all year to have that one moment of blink-blink-blink-what? every so often. Crawford reminded us why he's one of the more exciting defensive shortstops to watch, and that's either the first or last play on his highlight reel. Also, the highlight reel is set to Joe Satriani. If Crawford's hair is shorter, maybe I pick something else ...

By WPA, this was the most dramatic hit of 2013. It was a three-run homer with two outs and the Giants down two. That's a rare combination. Probably shouldn't take that for granted.

But it's at the bottom of the list because the Giants' season was already in the toilet. The reaction wasn't frantic fist-pumping and whoops of joy. It was laughter. As in, hee hee, did that really just happen? Your mileage may vary, but the instant reversal of a sure loss is merely fantastic with a bad team. It's not sublime.

That written, check out that dinger. Wheeeeeee! I like how Sanchez does the J.T., walking on the inside of the base line as if that helps the ball stay fair*. It doesn't hurt that it came against Rafael Soriano, who is a dingus. If you click that link, you'll get a video of an honorable mention for this list! Everyone wins!

Cheating! A tie designed to sneak an extra highlight in! Except you can't really have one without the other because they came on back-to-back nights against the Diamondbacks. First, Sandoval's homer:

Nothing gnaws on your innards quite like a 1-0 loss. This was going to be a 1-0 loss, you could feel it. Even with one out and a runner on second, you knew the Giants weren't going to come back. Then, in a flash, they were ahead. Bonus points for Kuiper's "And Sandoval looking mighty thin rounding the bases."

The crowd noise -- that disgusted murmur of three wasted hours -- is just perfect, too.

Then the next night, it happened again:

What a delightful 0-2 pitch.

I was staying at the hospital for both of these games, checking in intermittently, head already swirling. And I vividly remember thinking, "How old is this kid going to be when the playoffs start? Five months? Six months? Man, that's going to be tough."

Thanks for helping me out, Giants. But the point is that at that moment, the Giants seemed invincible. Turns out they were spectacularly vincible. When Belt hit the homer, though, it seemed like it was going to be one of those seasons again. Those were good times. Good, too brief, retroactively melancholy times.

7. Johnny Monell reaches on an error

Just how you figured one of the best moments of the season would go. Monell reaches on an error that scores Ehire Adrianza, with Nick Noonan moving to second.

It wasn't exactly the most exciting moment, but it was one of the best. With that run, the Giants set an all-time Dodger Stadium record for runs scored. The Dodgers' record was 18, and they did it in 1977. The Giants blew past it because Michael Young can't play defense. That's also partly how the Giants won their first World Series in San Francisco, you know. 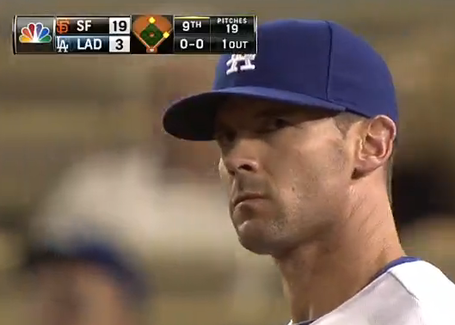 Why was that moment important? Because we're petty and small. When the season's in the dumps, a little rotten cherry like this means everything. But it was one of the best games of the season. Every time Dodger fans think, "Hey, what's the record for runs scored at Dodger Stadium?" that game will stare back at them like a Polaroid of their parents making out.

The Dodgers weren't outscored by 16 runs in all of their losses in July combined. That's ludicrous. This game, though, made it feel like they were vulnerable after all. That was worth something, alright.

The best part might be that this one happened in Petco Park. He's now the career leader in home runs at Petco Park, with three. He broke the previous record of two that he set earlier in the day.

What's a personal milestone like that worth late in a lost season? A lot, at least for me. Just a couple weeks earlier, Sandoval's slump was reaching depressing lows. He wasn't hitting, wasn't walking, and wasn't hitting for any kind of power -- he knocked two combined homers from June through August.

Sandoval looking like that at the end of the season was one of the things that made you feel better about 2014. There weren't a lot of them by the end. Here was one.

This also makes it because of the lol-padres factor, which is hard to ignore.