Share All sharing options for: Revisiting the Hunter Pence deal

Let me take you back to a time when Edgar Renterias roamed the prairies of free agency. Eventually the unchecked waste would turn them into Miguel Tejadas, but that's a story for another time. The Giants needed a shortstop in the post-Bocock world, and Renteria was probably the best option on the market before the 2009 season. The Giants pounced.

Two years, $18 million. Seems like an adorable contract now, right? That's what Doug Henry would probably make today. But at the time, it was a bold strike. After years of missing out on free agents that totally would have turned the franchise around -- Gary Matthews, Juan Pierre, Carlos Lee -- the Giants had to come in strong with an offer that was too tempting to play around with. They got their man the first week of December, just before the Winter Meetings.

In the Winter Meetings, the bottom fell out of the market. Big guys like Matt Holliday and Chone Figgins still got big money, but the lesser guys like Orlando Hudson, Marco Scutaro, and Marlon Byrd didn't get quite as much as Renteria. The Giants anticipated a market that wasn't there.

Everyone laughed at the Giants.

Look at the Giants. 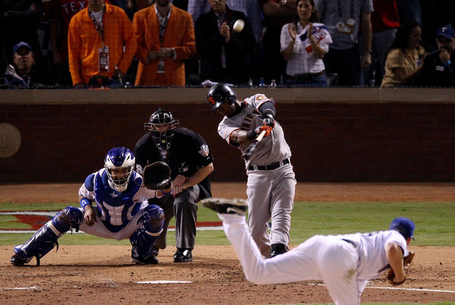 Whoops! That wasn't the point! The point is the Giants slightly overpaid for a guy they really wanted a few years ago. But that's a heckuva picture.

Flash-forward to 2013. There were going to be three big-ticket outfield free agents on the market. The Giants' plan was to get one. The Giants' preference was to keep the guy they liked.

To keep the guy we all liked. But to make sure they could do it, they had to pounce. Just like they did with Renteria, but even before the season ended. Back in August, I argued for four years, $56 million, but nothing more. The Giants gave him an extra year and an extra $34 million. While I was glad to have him back -- and while I'm glad we're not talking about Corey Hart in left and Michael Morse in right -- the price seemed excessive. It didn't seem like there was a discount at all.

A comparison of the three outfielders the Giants could have pursued this offseason:

Pretty even. Maybe Choo's the better overall player, but it's close. Until you get to the contracts.

The Giants guessed at the market. They won. I found out about the Pence deal via a text message. I was golfing. Couldn't believe Bryan would text me while I was golfing, but whatever, that's another story. The first message just read the Giants had a deal with Pence -- no years or money were mentioned. I made a vaudevillian, comic gulp and then asked for the particulars. It was a big deal, bigger than I was expecting. It was a year longer than I'd hoped.

My concern was the end of the deal. What's Pence going to be like in years four and five? How is there any way this doesn't turn into the Rowand?

Now tack on two years and $40 million to the end of that deal. That's what Choo got. Even if you're convinced that Choo is better, he's not that much better. He's not seven-year-deal better. And, good gravy, there's no way I'd want Ellsbury at that price over Pence. That's two extra years and $63 million more. You can probably get Matt Garza for the difference. Or four years of Lincecum!

The offseason dust is settling. But it looks like Pence was a relative bargain, and the Giants were right to pounce at the end of September. The Giants were going to leave the Winter Meetings with one of these outfielders, I reckon. I'm not sure if they got the best player, but they got the best deal. In December, 2018, you'll be glad they did, even if July, 2018 will probably be something of a drag.