Does Bruce Bochy belong in the Hall of Fame? Should we wait for Jack Morris to weigh in first?

I don't know the answers to these questions, but I definitely wanted to take a shot at Jack Morris.

Share All sharing options for: Does Bruce Bochy belong in the Hall of Fame? Should we wait for Jack Morris to weigh in first?

John Shea posted an article this past weekend about Bruce Bochy's Hall of Fame chances. It's a nice piece discussing his managerial career with some choice quotes from industry vets such as Jack McKeon, who believes Bochy can manage well into his eighties. Shea also shows his skill as a professional writer by using "Which invites the question" over the lazily inserted *and* incorrect "begs the question" that most writers -- myself hella included -- do a lot.

Oh, but back to the article. It's also a helluva "What If?" thought-provoker, too. WHAT IF BRUCE BOCHY HAS BEEN A HALL OF FAMER MANAGER THE WHOLE TIME?

I mean... yeah, Keanu. I know, bro. I'm right there with you. My mind is blown. My synapses have been sy-napped in two. Did you ever think... *could* you ever think that Bruce Bochy, the dude who used to manage the grody old boring San Diego Padres, might wind up in the Hall of Fame someday? *Major League Baseball*'s Hall of Fame? How did we get here? Where's our Bruce Bochy Commission?

The Double Switcher in Chief has won exactly as many games as a manager as he's lost (1530-1530, excluding postseason record), but he's also been at the helm of two world championships. He's skulled his way into our hearts with some savvy strategy --

And even some memorable images -- 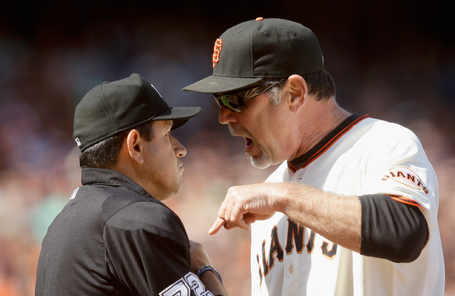 These barely scratch the surface, though. And yet, for every positive memory there's playing time for walking dead Aubrey Huff, Aaron Rowand leading off, Brandon Belt benchings, a pitching change a batter too late, and the Vinny Castilla quote. So, it's a bit of a mix and depending on how you weight good vs. bad it's entirely possible that for most of you or even most of us (depending on my mood), Bruce Bochy might not be better than a mediocre manager and the notion that he might be an all-timer a hilarious farce on par with Joel Sherman not using all 10 slots in his Hall of Fame voting (starts at 3:22).

But I wouldn't dismiss the notion so easily, and not solely because of the record and championships. Our proximity to the team definitely lets us take in the view of his many warts, but we also get a clear view of his many strengths. If someone held a gun to your head and forced you to accept that Bruce Bochy is a Hall of Fame manager, you'd have to rationalize it with the thought that no manager is perfect.

Barry Zito sucked long and hard for the 2010 team (lol well not just that season tho amirite bros?) and yet Bruce Bochy didn't run his standard veteran.exe program that could've hobbled the team in the postseason. He made a decision for the good of the team. How much of that was motivated by the sense of trust that existed in the clubhouse? I cannot recall a player ever badmouthing ol' Bochy (maybe Phil Nevin?) and I cannot recall any public image change of him that went either wholly in his favor or wholly against him. He has been solidly boring and "unremarkable" his entire managerial career. But he keeps working, keeps motivating players... whole teams oftentimes comprised of hilariously awful talent... and generally not rocking the boat wherever he is. The industry respects him. He's entertaining in a lot of interviews, despite his robotic voice. The scene where he tells Brandon Belt he made the major leagues was perfectly Bochy and perfectly *not* Hollywood. He could be a savant in terms of working the press, but that's such a cynical view I have to laugh at myself for even suggesting it, even jokingly. No, it's pretty clear that Bruce Bochy's public persona is genuine.

I'm not sure what a Hall of Fame manager *should* look like. I know that results should probably count more than process. For example, I don't really care how Willie Mays came to be so amazing, I simply enjoy that he was so very amazing. Process is a problem for the present and the future, but a hall of fame -- and, quite literally, fame itself -- is all about the past. And, of course, it's not like Shea's pitching Bochy as a HoFer *right now*, but soon. I think the Giants and Bochy have the potential for some success over the next three seasons (the term of Bochy's extension) that will effectively pad his candidacy. That doesn't feel outlandish or wishcastingesque to me.

So if we remove the anxiety of future lineup consternation and pitching change Machinations from our minds and simply focus on the past, then I think we can feel pretty good about the idea that Bruce Bochy is a Hall of Fame manager. He's put in the time, he's produced the results, he's a good guy, he's not controversial. He's Bruce Bochy, Hall of Fame Baseball Manager.