Marco Scutaro did not travel back in time and prevent your parents from meeting. As such, he's still a fan favorite, still a beloved postseason hero. Everyone likes Scutaro except for Cardinals fans and Dodgers fans. Think about that. Is there a better metric by which to judge a man's character? I submit there is not.

Of course, a 40-for-100 start from Joe Panik in Fresno is all that stands between postseason hero and the wrath of the fans. But that's pretty unlikely. He probably doesn't have to worry about getting aubried anytime soon.

Last year was supposed to be the reason for the three-year contract. I pretended it was more like a one year, $19 million contract with two option years at the major-league minimum, considering he was just about the Giants' only option at second. Now he has two years and about $13 million left, which is kind of a steal in this market. Quick: Scutaro, or Omar Infante for two years and $27 more? Even though Scutaro eats at Carrow's and drives a '63 Plymouth, I'll take the lower commitment/risk, every time. Turns out that scary three-year deal wasn't so recklessly short-term, after all. The same thing goes for Pagan's deal, actually.

Brian Sabean: always one step ahead, just as I've been saying for the last 10 years.

But that idea that Scutaro's deal was always about 2013 was predicated on the Giants being good. Which they were not. So it didn't really mean anything that Scutaro was good when healthy, bad when hurt, but a good player overall. Still, his season was at least somewhat encouraging. If he were only hurt and awful all year, the Hudson/Morse cavalry would be just a touch depressing.

Other than missing an extra 40 at-bats or so, Scutaro did even better than projected, at least from an OBP and average standpoint. And if you buy into the wacky park effects used in OPS+, it was actually Scutaro's best production as a hitter. A graph! 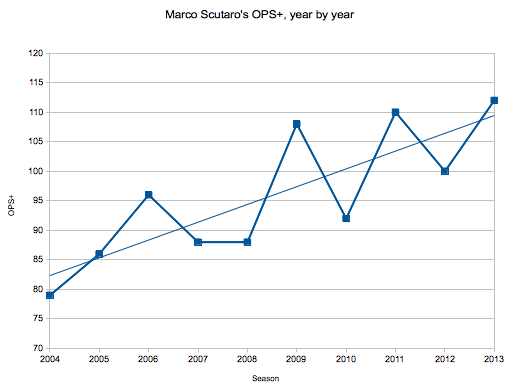 According to my research, Marco Scutaro will be Miguel Cabrera in about 10 years. I'll bet he'd sign a 10-year deal at very favorable rates, you know.

There are a couple of questions that are probably better suited for next year's community projection. First, when is the age-defying going to stop? Second, are the back problems a harbinger of doom, or something the Giants shouldn't worry about for another year or two? Even though Scutaro was productive last year, there are a couple of obvious warning signs.

But when looking back at his 2013, mallet fingers aside, it was a mostly positive campaign that gave us hope that Scutaro will squeeze out another good year before shuffling off the cliff. When he's right, he's an absolute joy to watch hit.

That's not included as a lolcardinals jab or a never-gets-old TGWTWSA reminder. It's a GIF that shows Marco Scutaro hitting line drives all over the place. What would a Scutaro shift look like? Twelve fielders and 290-foot fences, I guess. Apart from the injuries (and piranha-plant range), he's still a bad, bad man. And that's good.

About that part where all we hoped for was a good 2013 … I, for one, was totally kidding. We were expecting at least two good years. At least two.