Previewing the starting pitchers on the free-agent market

Share All sharing options for: Previewing the starting pitchers on the free-agent market

Apparently, every offseason, there are starting pitchers who aren't technically affiliated with a professional baseball team. They are free to join whichever team they want. "Free agents," if you will. This happens every year! 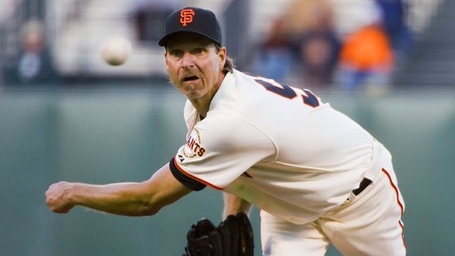 GAHH. Don't do that when I'm holding hot coffee, you fool. But, yes, the last time the Giants were actively thought to be on the market for a starting pitcher, they came away with Randy Johnson.

And that move is an interesting one to bring up today for a few reasons. Johnson didn't do very well in his final season, throwing 96 innings with a 4.88 ERA (87 ERA+), so it's easy to consider the move a mistake. But I loved the move at the time. And in retrospect, I still like the idea behind the move. Pitching is absurdly expensive on the open market, and teams end up giving third, fourth, and fifth years to pitchers who probably won't be effective at the end of the deal. Matt Garza is going to get at least five years, even though he's spectacularly a'ight. That's the price of pitching in the wild.

Johnson, though, was a risk because he was 45 (!), so he wasn't going to get three years. He wasn't going to get two years. He got one year at a salary that was more than fair ($8 million). If the Giants wasted extra years on a pitcher who was just a little less risky, they wouldn't have had money to sign players like Mark DeRosa, Miguel Tejada, and Ryan Theriot in subsequent years. The results weren't so hot with the Big Unit; the process was sound.

I fashioned my own Tanaka bobblehead out of Now and Laters and old erasers. It sits on my desk, and I pour it a glass of wine every night out of respect. However, the Giants aren't likely to get him. And if not Tanaka, are any of those other guys good enough to give up a pick and/or multiple years for? Santana and Jimenez don't interest me at all, not when they're tied to draft-pick compensation. Garza kind of does, but in the same way a six-pound hamburger might interest me when I'm famished. Will probably go down easy, but I know there will be pain and suffering at the back end of the deal.

I'm not sure where Ricky Nolasco fits, but you can throw him on the pile if you want. Now, some of those pitchers might gross you out. Some of them might be too risky, some might be too injury-prone, and others might not be good enough for your tastes. The point is, though, there's a lot of them. And that's not including pitchers like Ryan Vogelsong, Shaun Marcum, Colby Lewis, Tsuyoshi Wada, and Scott Baker, pitchers who will be looking for cheap one-year deals to prove their effectiveness for next offseason.

This is an offseason with a lot of interchangeable parts, in other words. Of the players listed up there, you probably have a keen interest in two of them. The most effective of the bunch -- Arroyo, Burnett, Colon, and Hudson -- are so danged old, they likely aren't expecting three-year deals. What a coup! This old-player strategy just might work. I wonder if there's a way to alert Brian Sabean …

I'm not sure if Johan Santana can lift an umbrella with his left arm, but I want him. I could make arguments for everyone on that list, really.

We'll profile as many of these guys over the next month as possible. But if you're going to pick an offseason to have multiple spots in the rotation open, this isn't a bad one to do it. Not at all.