These rumors aren't exactly fresh, but they're still hot. First, from MLB Daily Dish, we have word the Giants are kicking Luis Ayala's tires:

Ayala is a very, very Giants reliever. Low runs allowed, low strikeout rate. He's basically Santiago Casilla with different consonants. Part of you wonders if he's really figured out how to pitch to contact. The other part of you wants to find out while he's pitching in Baltimore or Philadelphia or Madrid.

Then, from Tim Brown, there's an interesting/terrifying rumor of note:

From what I can gather, teams most interested in Brian Wilson are: SF, LAD, Cle, Det, Col, Sea, Bos. Cin cd climb in, depending on Chapman

Part of you thinks you're completely over Wilson. The other part of you knows that you'll talk yourself into anything if you think it can help the Giants. And you know you were impressed with how Wilson looked with the Dodgers.

I mean, not how he looked. His pitches, man, his pitches. That's the Wilson I remember, for better or for worse. 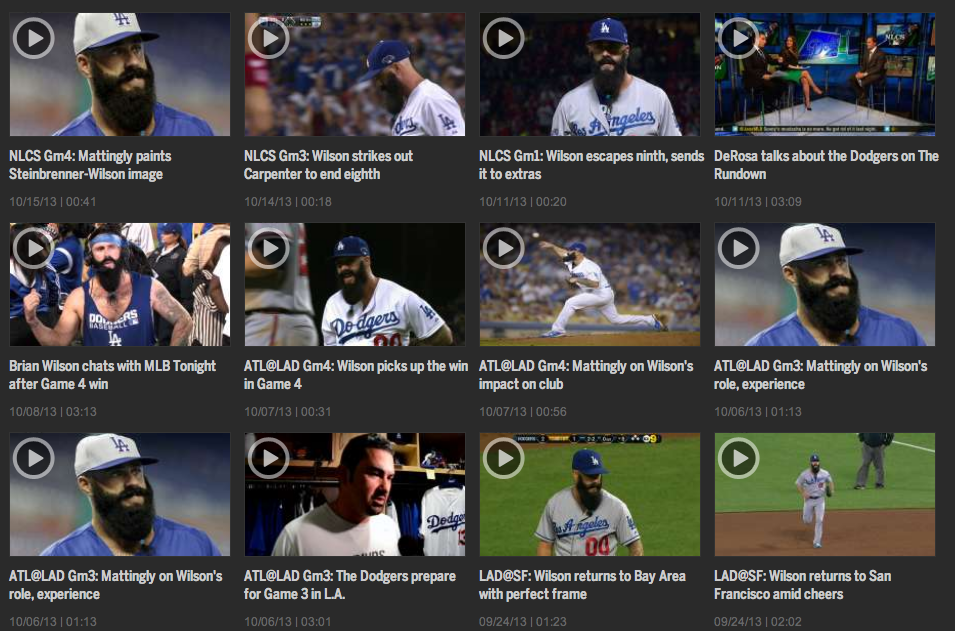 We can get into a should-they/shouldn't-they about Wilson and the Giants later. It's kind of fascinating to think what the dynamic would be between him and Sergio Romo would be like. Me-ow. But name and history aside, he's a decent gamble to be a quality reliever. The Giants need one of those. Or two of them. Possibly three? The bullpen members with guarantees, of sorts:

That's it. I'm expecting a hilarious three-year deal for Javier Lopez that I'll talk myself into, but right now, that's the Giants' bullpen. Jean Machi has an inside track. Maybe Sandy Rosario and/or George Kontos. Heath Hembree looked fantastic in his limited time. Yusmeiro Petit will probably be the Gaudin this year.

But there are still four bullpen spots to fill, and you know they aren't filling them all internally. So in addition to every stray Ricky Nolasco rumor that crawls out of the toilet tank, we should pay attention to the Giants' question to get some relievers. They'll get a couple. And they'll probably overpay because that's what you do on the open market.

I could talk myself into Wilson again.

I must certainly would not like to talk myself into Wilson again. He'll be too pricey, furry. I'm fond of Joe Smith, but I guess I can go for Ayala. Really, anyone but Chad Qualls. Oh, man, now, that would be the Giantsy signing ever. And I'm unironically expecting it, actually. But until the Qualls signing, here are some rumors about relievers. One of them you know. One of them you just looked up.