Learning how to root for the Braves

Share All sharing options for: Learning how to root for the Braves

Well, that didn't go as planned. Cardinals won. Dodgers won. One step closer to a Cardinals/Dodgers NLCS, in which Matt Holliday hits against Zack Greinke, and you drink drink drink trying to forget about the concept of "rooting" for anything ever.

But you know who won the first game of the NLDS on the road last year? The Reds. Yeah. Midnight trains goin' anywhere. Born and raised in South Detroit. Mm-hmm. The Braves could still win this yet.

This is a dilemma. Because the Braves are an awful, repugnant team. Their fans literally do a sneering Indian war chant in the middle of baseball games. Chipper Jones. 1993. There are so many things wrong with the Braves.

So we need a pep talk. We need reasons to root for the Braves. That they're facing the Dodgers is reason enough, but we need support. Encouragement. We're rooting for the Braves, and it's a dark, dark thing, man. Maybe this will help.

No one dislikes Hank Aaron. The Giants should travel to Aaron Park, and the Braves should make a yearly trip to Mays Field. If I were a millionaire, I would outbid everyone on auctions to eat lunch with Hank Aaron, and when I won, I would treat that lunch as if I were eating with Willie Mays, Joe Montana, and Teddy Roosevelt. Hank Aaron is a boss, and we're all fired.

So when the Braves are happy, Hank Aaron is happy. Think of it like that. Think of the jackasses who sent him hateful mail when he was approaching the home run record. Think of how good he must have felt to shut them up. Hank Aaron.

That's literally all I have 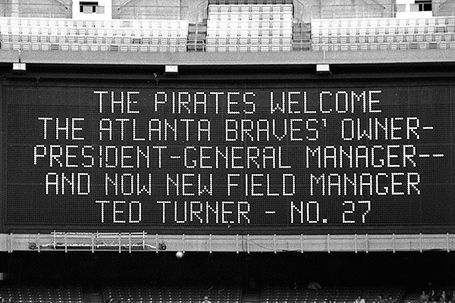 Imagine Bill Neukom in the dugout like that. You can't. It's a special kind of crazy. At one point in baseball history, the owner said, yeah, I can do this for a week. No problem. Then the owner married Jane Fonda. Then he became Jay Sherman's boss.

Or Jay Sherman's boss's rival. Whatever. It's insane that Turner did that. And endearing. I want one owner that crazy in any of my three sports. Just give me one for … five seasons. C'mon, Yorks. Have some imagination.

Craig Kimbrel is fun to watch

Also, Kimbrel is really, really, really fun to watch. It's been a while since the Giants had one of those relievers. Sergio Romo makes hitters look awful, but in a much different way. I'm talking about Robb Nen-types. Unhittable, completely ridiculous power pitchers. It's been a while. I could go for another one. Hit the weights, Derek Law.

They're horrible at it. They need a high-priced consultant to whip them into shape. I know a professional blogger who's good for $100/hr. Braves fan vigorously chant "BEAT LA! BEAT LA! BEAT oh bejeweled i'll just play for a few minutes" for several seconds at a time. It's a good start. Not enough, but a good start.

Perspective: The Braves haven't won a postseason series since 2001.

The Giants have won eight since then. Two of them against the Braves.

Not sure if the Braves qualify as bullies anymore. They're just another team. Another team with a HORRIBLE REPUGNANT STUPID CHANT AND SET OF TRADITIONS but mostly just another team WITH STUPID PLAYERS AND STUPID PLAYER-FACES and if you think about it FRED MCGRIFF IS A FREEMASON WHO ASKED A FAVOR FROM THE PADRES' FREEMASON OWNER they're creeping up on tortured-franchise status.

But I'm a Braves fan for the next week. Welcome to Mathews Musings. Hope you're having a good time.

Now don't screw this up, Braves.