No, no. Nothin', man. Top of the world. Giants just won the World Series again. What could possibly be wrong?

Level with me. Stumble into the basement of your subconscious and drag out a fear. Share it with the world.

Well … okay … but … I'm not comfortable with … whatever … I'm scared that Madison Bumgarner is tired and possibly broken.

That was a reasonable fear last year at this time. Bumgarner pitched seven scoreless innings against the Tigers in the World Series, sure, but he was completely dismantled by the Cardinals in the NLCS and the Reds in the NLDS. Wait, you know, that doesn't do it justice.

Alright, I didn't want to do this, but here goes: Madison Bumgarner looked so awful in September and October, that what it was his turn to pitch in an elimination game in the National League Championship Series, the Giants said, "Nah, thanks. We'll go with Barry Zito." And almost everyone was okay with this. It made a modicum of sense.

That's how bad the 23-year-old pitcher was after this game. After that, 34 runs in 34 innings leading up to the World Series. Bumgarner pitched well, mind you.

He's actually tied for fewest runs allowed in World Series history with Clayton Kershaw, you know. But his velocity was still down in that game, and he still looked tired. As tired as a guy who dominates for seven innings can look, at least. It was the good news after two months of bad news, but there was an entire offseason to process what Bumgarner's tired arm meant.

So if you had told me right after 2012 that the pitching went kerflooey, Bumgarner would have been the Col. Mustard (Ret.) in the corner holding a candlestick. Of course he was the unstable one. Matt Cain is never going to falter, and Ryan Vogelsong is steady. Lincecum was clearly okay -- look at the xFIP! -- and Barry Zito was going to ride his renewed confidence into a second career.

Bumgarner, though, jeez. Young pitchers are just so weird. He was going to be the one to flop, I just knew it.

Why did I pick such good things for Bumgarner, even after he ended the 2012 season on such a weird note, and even though I was secretly concerned? Because I'm an unrepentant fanboy, desperately telling myself things that make me feel better.

Why did those good things actually happen for Bumgarner? Because he's better than other pitchers.

If you're wondering about the innings for such a young arm, I am, too. There have been 37 pitchers in major-league history to have at least three 200-inning seasons before turning 24. As you might expect, they're a mix of Hall of Famers, Hall of Nearly Greaters, and Hall of Oh God My Arm Help Me Help Me My Armers. Don Sutton did it, and Bert Blyleven had four seasons before turning 24. But if you're looking for scarier recent comps, Fernando Valenzuela wasn't the same after 26. Neither were a lot of the pitchers.

I was going to stop it here and note at how the early-'90s simpletons made Steve Avery throw 200 pitches every outing, and that's why he stopped being good after he was 24, but that wasn't what happened. The Braves were ahead of the curve when it came to pitcher workload, at least with Avery in his last good year. Still didn't help him. Don't think about Steve Avery. He is the Stay-Puft Marshmallow Man.

No, Bumgarner's path is going to be the same as one man's: Bumgarner's.

And we saw him become the staff ace in 2013. Or, rather, the other pitchers took an ace sabbatical around him. But Bumgarner was even better than he'd been in previous season. His walk rate ticked up in August and September, suggesting there might have been another tired arm in store. Maybe that's why Matt Cain was so bad in the first half. He was protecting Bumgarner's arm from the rigors of another deep playoff run. He knew.

Man, that Matt Cain guy is just an American hero.

If you're looking for positive developments from the 2013 Giants, you can start with Bumgarner. He was one of the best stories of the year. And those variable mechanics that giveth and taketh velocity throughout his career? He's repeating them. 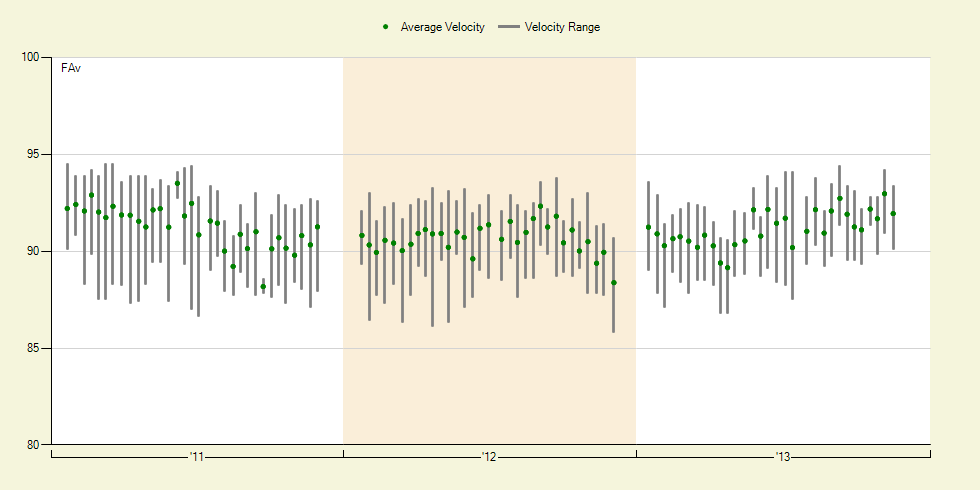 He saved his hardest fastball for late in the year. I love that trend. The other trend I'm enjoying is Bumgarner getting scruffier and scruffier. It's like watching Mike Patton's ascent.