It will never be a bad PR move for an athlete to take a full-page ad when he leaves his team.

Newspaper: I, Pedro Feliz, had a great time in San Francisco. I swung at a lot of baseballs, and ...

It's always going to be classy. There's no risk. So if you're a little cynical about the full-page-ad gambits, I don't blame you.

But Barry Zito took out a full-page ad in the San Francisco Chronicle on Monday, and it looked like this: 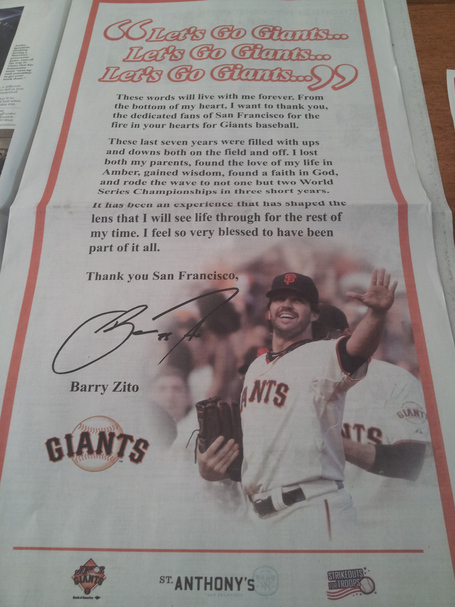 At the risk of being a sentimental fool, I'd wager that ad was a little more heartfelt than some of the other full-page ads sports fans have seen. There are a few reasons, but I think here's the main one: There are a lot of places that wouldn't have put up with the first four years of Zito. Especially if there were still a championship drought in the city. He would have been booed like crazy in more than a few cities after every bad outing instead leaving to a chorus of under-the-breath grumblings.

All things considered, Giants fans were patient. And after the two titles, with Zito being a hero for the second, Giants fans became really, really patient. But in those first four years, when it was clear that Zito wasn't going to be the ace he was paid to be, Giants fans had this weird, "Maybe he'll break through!" feeling about Zito. And, heck, looks like we were right! Kind of. But I think Zito respected that relative to other sports towns, he didn't have it so bad.

I'll still verbally spar with anyone who would rather the Giants have the $126 million back  and replay the 2010 and 2012 with new players. That's crazy talk. The championship seasons were a messy, sprawling tapestry that were filled with beautiful nonsense, and ZIto's as big a part of it as anyone else. It didn't work out as planned, but it still worked out. And I'm glad he's not a putz, too. He seems like a nice enough feller, which makes it easier to appreciate him.