Apologies for the omphaloskepsis.

Sergio Romo was detained yesterday by TSA agents in Las Vegas. Or he was detained by Sam "Ace" Rothstein because he was cheating the Tangiers with an accomplice. Or he was arrested after a SWAT team stormed his compound, which was stocked with ammunition and overzealous Romosexuals. I don't know. Probably the former. Whatever happened, it led to a statement that was released through the Giants:

I would like to sincerely apologize about the recent events at the Las Vegas airport which brought negative attention to the San Francisco Giants organization and its fans. I love and respect the Giants, my teammates and our fans and promise to conduct myself in the future in the "San Francisco Giants Way."

Okay. I'm almost as appalled that he split an infinitive, but I have my moments of weakness, too.

It was a non-story. A total non-story. Except, it was a story, especially on January 3rd, when the alternative was a Ryan Sadowski retrospective. And whenever there's a Giants-related story like Romo getting detained by the TSA, I get an e-mail from TMZ. No foolin'. They look like this: 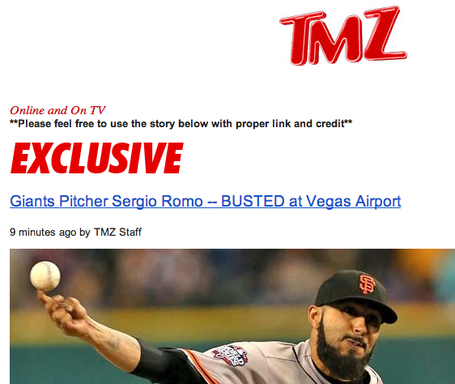 That is almost certainly the most obnoxious thing you've ever seen. It's the most obnoxious thing I've ever seen, for sure. And I flipped through it to make sure Romo isn't going up the river in 2013, and then I went about my normal day, which usually includes me propping my feet up, putting my hands behind my head, gazing wistfully at the ceiling, and saying, "Man, oh man, do I love Sergio Romo" at least once.

But then I started getting questions about my plans to cover it. Not pressure. Just questions from people who were incredulous that I wouldn't hit this news in the slowest of news months. And coverage started popping up at places I respect a lot, like Baseball Think Factory, and I wondered if I blew it. I probably did. But it allowed me to develop the Gold Standard for Covering Off-Field Events at McCovey Chronicles:

Will this make a clear difference with how the Giants play baseball in the future?

But I think it makes the site better when I ignore Sergio Romo having a bad few hours. It makes the site better when I ignore every twist and turn in the perjury trial of a since-retired Bonds. And when I write "makes the site better", I mean it keeps the voice consistent. This is a place for Giants wonks, where we argue about Bill Swift and fete Buster Posey until its creepy. It's a place where you're almost expected to know the name Kyle Crick and how it might relate to Jesse Foppert. And when you log in, you're probably expecting some sort of wonkery along those lines. A needlessly in-depth article about Scott Proctor, say.

There will never be a way to keep this place completely light and fluffy, locking all the naughty real-world concerns out, as we plug our ears and sing "I'm blue da ba dee da ba die" until it gets stuck in the head of the person in the next cubicle. I get that. But if I know the story is going to blow over even before the next news cycle, it's probably not going to fit here.

Unless it's Shawn Estes stealing a police bike, and I spend three hours photoshopping his face onto old Italian movie posters. But that's an exception. If I get an idea that amuses me (even if I'm sure it will amuse no one else), well, all bets are off. If not, the standard is, "Will this make a difference with how the Giants play baseball in the future?" The Romo news didn't qualify. It didn't come especially close.

Thanks for indulging me. Now let's all turn our attention to the real news of the day, which … well, dang it, really is Ryan Sadowski. Huh. Maybe I can write a mini-screenplay that opens with Sergio Romo winging sliders at TSA agents instead. Gimme a sec ...