In which we look at a box score of yore for no real good reason.

Share All sharing options for: Random box score from the past: 1983

Did they even have a 1983 season? According to Baseball Reference, they did. But you know that Big Baseball can put fake webpages up whenever it suits them, so let's make sure we're not being duped. It would really be an elaborate conspiracy to fake an entire season. And for what? For whom? To what end? The Orioles Memorabilia Lobby, who wanted to make some quick cash on fraudulent "1983 World Series Champs" shirts?

But until there's proof -- like, say, a random YouTube video that makes no effort to be logical or rational -- we'll just assume the '83 season happened. The Giants finished 79-83 in a remarkably clustered National League. They scored 687 runs, and they allowed 697 runs. They would have been the most blah Giants team in franchise history, except they had all sorts of young talent. Jack Clark, Chili Davis, Scott Garrelts, Mark Davis … and a feller named Atlee Hammaker, who pitched in this game:

Again, that date is a link! It's a secret link! All links are bold here at SB Nation, but not all bolds are links. Keeps you guessing.

It was the second game of a doubleheader, and Hammaker was masterful, pitching a complete game for the win. The win brought him up to 10-4 on the season, and his ERA down to 1.72. That's an ERA under 2.00 in July. You think Giants fans were a little giddy about him? It wasn't all smoke and mirrors, either, as Hammaker was an anomaly back then with his strikeout-to-walk ratio. It's common now for good pitchers to have three or four strikeouts for every walk -- if not common, it's at least not that rare. Back then, Hammaker was something of a freak.

Oh, and in between, there was unpleasantness:

I mean, it wasn't all bad. Atlee got to rock a Croix de Candlestick on his cap. For years, the narrative was that this grand slam shook Atlee's confidence, and he was never the same because of it. Which is hokum. The box score around which this post revolves comes from the first game after the All-Star Game. Confidence seemed pretty ship-shape.

But after two more starts, Hammaker missed a month with arm issues. He came back to make five starts, but he was shut down in early September. He made only six starts the next season, but he was never the same.

He did get to be teammates with Michael Jordan, though! That's a nice conciliatory anecdote to a what-if career. But he was supposed to be the next Marichal. Now you know why the old-timers get so weepy about Matt Cain and Tim Lincecum. Before Foppert, before Kelly Downs, there was Atlee. For a while, it really looked like it was going to work out.

Even worse: After this game was over, his on-base percentage for the year was .357. So he would have been making us all look so, so, so, so stupid. We would have complained and yipped and yelled about how stupid Frank Robinson was to bat LeMaster leadoff, but he actually had a decent OBP. And 28 steals!

You know, I don't care what uniform he's in. I still want to punch Ron Cey right in his big fat beak. 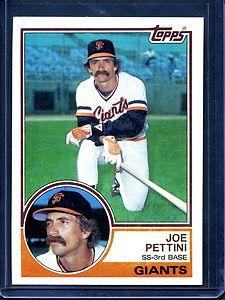 Oh, man. This site would have been Pettini Chronicles if I had any say in it. It's not quite as elegant as his '81 Topps card, but the inset photo of him looking off into the distance -- probably at some potential action he was talking to down the third-base line before the game started, if you had to guess -- is pretty sweet.

I'm pretty sure it was Pettini who secretly pushed for Chris Carpenter to be rushed back before the playoffs. Secret agent, Joe Pettini. Would you say no to whatever that man asked?