Share All sharing options for: 13 things about Scott Proctor

The title came before the article. So right now, I'm dealing with crippling pressure. Maybe a better title would be "I dicked around on Scott Proctor's Baseball Reference page for an hour so you didn't have to."

The Giants signed right-handed reliever Scott Proctor to a minor-league deal. If you're wondering who Scott Proctor is, well, you must not have been in my middle-relievers-only fantasy league for the last decade. Dude was a sixth-round pick most years. And now Proctor will compete for the Guillermo Mota/Clay Hensley Memorial Bullpen Spot, along with Chad Gaudin, who also got the 13-things treatment.

Is there a way to find 13 interesting things about Scott Proctor? We shall see!

Oh, hello there, elephant in the room. I seeeeeee you behind that fern.

The usual disclaimers apply. If you were to make a list of the 1,000 best right-handed pitchers in the world, Proctor would be on it. He's pitched in seven different seasons, and he's made a couple of million for himself. You don't do that at being bad at baseball compared to the rest of the world.

But compared to his peers -- players with legitimate shots to make a big-league roster in 2013 -- Proctor isn't very good. As always, ERA isn't the best way to measure a reliever, but you can get a glimmer of understanding of how his last three major-league seasons have gone just by listing his ERAs:

And, seriously, I'm a sucker for a new-pitch story. Proctor attributes his Korean success to his new split-finger fastball. I'm sold!

3. Stats for Korean baseball are crazy-hard to find

From this article, we learn that Proctor had a 1.79 ERA and 35 saves for the Doosan Bears. But I can't find the strikeout/walk totals anywhere, probably because of this:

Websites with contracts to receive KBO statistics are not allowed to release them to the public. They charge fees for the data so as to generate profits, but if you’re not the media or in baseball you can’t get near it. It seems KBO statistics are to be treated as if they were some kind of national secret.

That was in 2008, so I'm guessing things have changed. But if not … huh. I guess that's one way to keep interest high in your product.

4. Proctor was picked in the fifth round of the 1998 draft, exactly two picks before Ryan Vogelsong

When I clicked on Proctor's draft year, I was hoping that he was drafted in the same year as Frumsnitch Wunderbar or something. That would make an interesting thing about Scott Proctor.

Instead, he was taken by the Dodgers instead of Ryan Vogelsong. If the Dodgers take Vogelsong with their pick, maybe the Giants don't have the pieces to trade for Jason Schmidt. Maybe the Giants lose an extra game without Schmidt in 2001, and there's a player available in the draft at their new position who interested them more than Matt Cain. And, of course, Vogelsong never comes back to the Giants because he was never here with Dave Righetti in the first place.

So what I'm saying is that every Giants pennant and World Series since 1989 is because the Dodgers liked Scott Proctor more than Ryan Vogelsong. Connect the dots, people.

Vogelsong wasn't the best player drafted in the fifth round that year, though. Aubrey Huff went a few picks after that.

5. In Proctor's best season, he pitched in a league-leading 83 games, which allowed him to accumulate 102 innings

He was never the same after that. Basically, Joe Torre shot him in the arm with a syringe stuffed with Jim Brower.

6. His best similarity score on Baseball Reference is Jerry Spradlin

Which is perfect. Just perfect. There's also a Chris Brock and Justin Miller on there, with Scott Service on the age-related comps. Where's Bronswell Patrick and Wayne Gomes? Must've run out of room.

7. The hitter Proctor has faced the most in his career is Vernon Wells

The highest career OPS against Proctor belongs to Barry Bonds, who has a 5.000 career OPS in two plate appearances against him. I think that lowers Bonds's career mark, so good job, Proctor!

8. Like Chad Gaudin, his full name is a noun

He switched the slides in the scottproctor. "No, no, no … this can't be," he muttered. Could Dr. Paulens have tampered with the sample? It was possible, but when would he have had the time? He was at the banquet all night. the perfect alibi. No, there had to be another explanation.

10. Proctor has a subsection of his Wikipedia page titled CONTROVERSIES Included:

On June 30, after a poor performance in a loss to the Oakland Athletics (and after taking the loss in each of the Yankees' last two games), Proctor lit fire to his equipment on the field, just feet from the Yankees dugout.

Gonna nickname him "Monterey Scott Festival" and be done with it.

11. This is also part of that Wikipedia page

Proctor's fastball ranges from 94 mph to almost 100, although he was known to throw beyond 100 as the closer for the Columbus Clippers, the Yankees' former Triple-A affiliate.

12. This is what happened the first time Scott Proctor put a ball in play in the major leagues 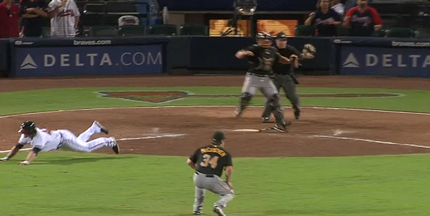 Pretty much. Watch out, Santiago Casilla. There's a guy angling for your spot, and I'm certainly not talking about in the bullpen.

There you have it. Scott Proctor: reliever you might never think about again, unless he appears in every other game this April.