How did the young lefty do last year? He won the World Series, stupid.

Madison Bumgarner is only 23. It's easy to forget that. Remember Casey Kelly, the Padres prospect who was the centerpiece of the Adrian Gonzalez trade with the Red Sox? He's 23. And he's still quite a prospect. He'll come up and struggle and thrive and flail and amaze, and in two years, maybe -- just maybe -- the Padres will know what they have in him. He's the same age as Bumgarner. That's how things are supposed to work. 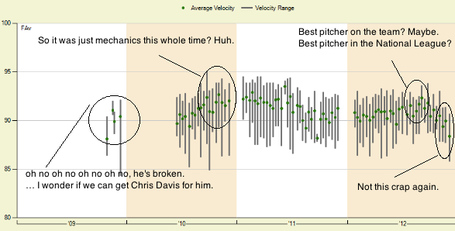 He's still just 23. And here we go again with the velocity worries. Ugh.

Yeah, pretty much. But I think this is the last Community Projection Review on the books. So goodbye, 2012. It was fun, as far as baseball seasons go. No complaints, I suppose. Let's see … nope, nope, it looks like everything worked out pretty well. That was just a swell season.

What we predicted for Madison Bumgarner:

Two-hundredths off. Damn. I would have won something. I'm not sure what, but it would have been a car or a stuffed animal. Something like that. As is, I'm nothing but another prognosticating failure.

But while the ERA seems like a close projection, it didn't take into account the extreme pitchers' park that AT&T Park played like last year. It was historic, suppressing runs more than just about any other park in history, according to the single-season park factor. Which means that the 3.37 ERA for Bumgarner really wasn't that impressive. If you use ERA+, Bumgarner's mark (103) is exactly what Joe Saunders had. If you go by wins above replacement, Bumgarner was tied with Chris Capuano last year, just below Paul Maholm.

That seems … off. I'm going to guess there was something off with the park factor last year. They are prone to sample-size chicanery. They're based on the runs scored and allowed on the road, matching them up with the runs scored and allowed at home. Maybe the Giants just had a few of those 10-run games on the road. Maybe they would have whomped those same Rockies pitchers just as hard in San Francisco as they did in Coors Field on that specific day. If the byproduct of that assumption is that I get to believe Bumgarner (and Ryan Vogelsong) is something more than an average innings-eater, I'm willing to believe.

After an eight-inning, scoreless outing on August 20, Bumgarner was 14-7 with a 2.83 ERA. He had walked 32 batters and struck out 160 in 171 innings. He was emerging as a dark-horse Cy Young candidate. In the seven starts after that: 17 walks in 36 innings, with a 5.89 ERA. It's impossible not to point out that Bumgarner threw 123 pitches, a career high, in that August 20 start; it's impossible to say with any certainty that was the cause of the wonky mechanics. The timing is just funny, though.

Kind of like how the Rockies' absurd home-field advantage disappeared when MLB started its humidor-oversight program. I'M NOT SAYING ANYTHING … other than saying, boy, that sure is interesting timing. Makes a feller think. But I'm not saying. Just saying. That's what the 123-pitch outing is like. It's worth pointing out. It's not worth guaranteeing the correlation.

What we're left with is something a little different than expected, even if the projection wasn't too removed from reality. This wasn't Bumgarner's first start-to-finish masterpiece. In 2010, he was an enigma who developed into a franchise cornerstone. In 2011, his rough start made me write articles like this. In 2012, he was really good, but with clearly defined starting and stopping points that make you wonder.

But, at its most basic level, here's the lesson learned from Madison Bumgarner's community projection: He was supposed to have a good season. He had a good season.

Now let's all knock off early and watch a video.