Which team will provide the most competition for the Giants in 2013?

We'll start with the other two teams, just so they don't feel left out. First, the San Diego Padres. I like the team they're building down there, I really do. They have a legitimate lineup and a deep farm system, and if I could wave the Magic Wand of Pitcher Health over their beleaguered rotation, they would be in the discussion. Andrew Cashner, Joe Weiland, and Cory Luebke is a much nicer start to a rotation than what they have temporarily. 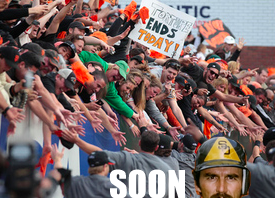 But not yet. I don't wave that Magic Wand of Pitcher Health around lightly, no sir. And then there are the Rockies, who have two different charities that have combined to contribute more than $20 million to community programs in the Denver area. That's great!

For now, though, it looks to be a three-team race between the Giants, Dodgers, and Diamondbacks. And the Diamondbacks have either done a horrible thing that is stupid and horrible by trading Justin Upton for Martin Prado, or they've made a deal that made them a little better in the short-term. Unless it's somewhere in the middle.

This all begs the question: Which team scares you more? The Diamondbacks or the Dodgers?

You can make arguments for either one as the eventual division winner. And, of course, something unexpected will happen. Surprise! A.J. Pollock hits 43 homers after filling in for an injury! Or, surprise! Turns out Hyun-Jin Ryu is like vintage Pedro Martinez! But using what we know now, I can see potential breakouts and busts that can push them either of them above or below the Giants in the standings.

But here's where I separate the two: I find myself typing "If" a lot more with the Dodgers. If Matt Kemp is healthy. If Carl Crawford is healthy and/or any good. If Hanley Ramirez can hit enough to justify playing him at short. If Ryu is a plus pitcher. If Josh Beckett can reclaim his form. If Luis Cruz is really better than the 12 prior seasons of professional baseball suggest he is. If Zack Greinke is as good as his FIP, not his ERA. If Adrian Gonzalez's season was a hiccup, not a trend. If Mattingly sits Ethier more against lefties. If Juan Uribe will RISE UP and SLAY his oppressors.

With the Diamondbacks, I'm more comfortable with just about every player in that side-by-side. Cahill is Cahill is Cahill, which is a swell pitcher, even if he doesn't improve a lick, and the same goes for Ian Kennedy. Miley was the runner-up for Rookie of the Year last year for good reason. The biggest if is with McCarthy and his health. Or maybe Aaron Hill and his hot/cold production.

It's not as if you can't get a list of ifs for the Diamondbacks, but they aren't exactly the pillars jutting up out of their contending foundation. The Dodgers' ifs are revolving around just about everything that's supposed to make the good in the first place, with the exception of Kershaw.

Stupid Kershaw. So good, so annoying.

Your mileage may vary. And I'm certainly not saying the Dodgers are doomed, or lol Dodgers or anything like that. I think I picked the Red Sox to win 90 and the A's to lose 90 last year. Wacky things can happen. When I constantly refer to the Diamondbacks as the team that spooks me, note that the race kind of a spooky tie of spookiness, not a foregone conclusion.

But even after the Upton trade, if you force me to pick the biggest threat to the Giants repeating as division champions, I pick the Diamondbacks. And then the Dodgers would buy the Diamondbacks and shoot them into the sun. So it's kind of a win/win, unless the Giants lose a lot.