IN AN ALTERNATE UNIVERSE ... the Orioles won 87 percent of their games on shootouts last year. Here's a peek into that universe.

Share All sharing options for: If the Giants fell down a lot ...

I've been waiting a while for this one. A fella by the name of Mark Willis has been going through the different baseball teams around the league, re-imagining their jerseys as soccer jerseys. It's fascinating stuff.

The N.L. West is here, and it's spectacular. But while the jerseys are good for making you think about a sport where people kick a baseball around and fall down a lot -- you know Shane Victorino would be the best flopper in in the game -- it's this paragraph that caught my attention:

This is is the Giants’ time. They’ve won two of the last three World Series. Their stadium is on the very, very short list of perfect places in the world to watch a baseball game. Their city, by virtue of the tech industry, sets the agenda for modern society. (Did I mention that its got all the benefits of east coast urbanity, plus better weather, a less parochial populace, real burritos and that Sunday football starts at 10am? Anyway.)

I have every intention of fulfilling my marital vows, but if I were to pay an escort to read that sentence to me repeatedly while I lifted weights and looked in the mirror, that wouldn't be weird, right? It would? Okay, well, I never actually did it, so you can't judge.

Every team has an ad prominently emblazoned across the midsection of its jersey because that's how soccer rolls. Before you judge, remember they don't have commercials until halftime. They didn't have to hear the soccer equivalent of "THIISSSS TRAAAAAAAAAIN" 19,303 times during the Champions League, nor do they want to stab that woman-hating wastrel who endlessly complains about recording one show at a time like some sort of savage. The tradeoff is an ad on the jersey, among other things.

I've been following the series for a while, and a lot of the jerseys are radical reinventions like this: 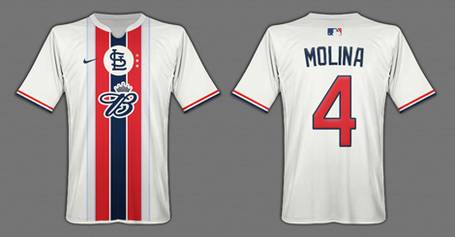 So I was surprised to see the Giants' version stay so close to the real jersey's roots. The only piece of flair for the Giants' uniform is a strip of stars above the left breast: I'm not going to post the Giants' picture because then you won't click, and that's, like, the only reward the artist is asking for.

On the breast, the famous ‘SF’ logo mark, and above it, seven stars - the first five are deep grey, representing the more historical championships won by the New York Giants.  

The sixth star is slightly lighter and larger, indicating the team’s quite recent 2010 World Series win; the final star is the largest and bright orange to indicate that the Giants are the current holders of baseball’s championship.

Yessssss. I'LL TAKE SIX. Is there anything not to like about this?

(I know there are at least a few Giants/Raiders fans that would be excited about that.)

Gross. Those people are just a myth. Dashon Goldson hunted the last one down and knocked him into the Pacific a long time ago. It was like Munich, but with more blitzing.

Anywho, this felt important. If the Giants were a soccer team, Buster Posey would have a billion goals and Matt Cain would be an unstoppable force of a goalie. Tim Lincecum would have long hair again. Pablo Sandoval would be thinner than Eugenio Velez, and Velez would still be tangled in a net somewhere, hoping someone would come along with a sandwich and some scissors.