In which we resurrect games that no one remembers, especially you.

Share All sharing options for: Random box score from the past: 1977

Why is this box score so danged important? Because it's the last Giants game that happened without Grant M.F. Brisbee spinning around this wacky planet, baby. I don't know what it means, but it means something.

Oh, wait, it's a Padres game. No, it probably didn't mean anything. Was anyone even there? Did it even happen? Let's look. The date of the game:

That date is a link! You can click on it to get to the actual box score. Here at SB Nation, we like to make you guess at what's just bold text and what's a link, because the Internet is about a lot of things, but it's not about sharing links! And at that secret link, you'll find the following particulars at the bottom of the page:

a. Check out that time of game!
b. Wow! What a mob scene! The previous two games had attendance totals of 1,864 and 2,549, respectively.
c. Astroturf. The answer is Astroturf. So the field condition was "Communist plot."
d. ******* cold. And the first person to bring up the nice October weather around here gets stabbed with a Croix de Candlestick. It was still cold.

Bob Shirley threw a complete game and shut the Giants down, even though he was just made up five seconds ago by the computers who create my waking reality. He also had two hits, which is more than anyone on the Giants had. Dave Winfield did Dave Winfield things, doubling and tripling, though Winfield was just a promising, excellent young player back in '77. He hadn't turned into a perennial All-Star yet.

But enough about Dave Winfield! You can tell by the color of the hyperlinks who the interesting player on this team was: 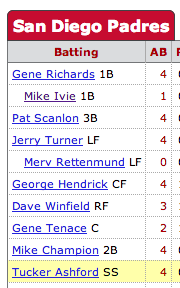 Yep. A team full of Padres, and the one whose page I've visited since last cleaning my cookies a year ago? Mike Ivie. That was the last game he'd play with the Padres, who drafted him first overall in 1970. He was supposed to be a star, and he was actually kind of good for the Padres, but no one could tell because Jack Murphy Stadium was like the Petco Park of the '70s.

The Giants traded for Ivie over the winter, and he became the heir apparent to Willie McCovey, whose last good season was in '77. Poor Willie could never really wash the stink of Padre off him after coming back to the Giants. It smells like yellow and sick and Carmelo Martinez. Ivie's last at-bat with the Padres was a flyout to center. I'd like to think he paused and thought, gee, this sub-zero cement toilet with Astroturf sure would be a nice place to call home. I'm gonna ask for a trade this winter. 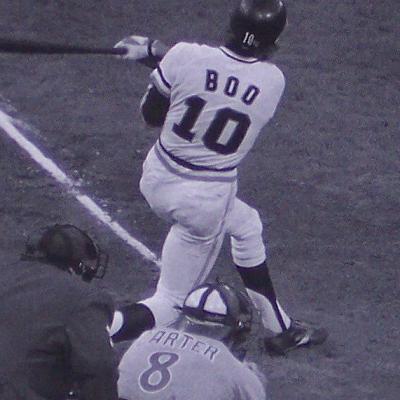 The man literally wore "Boo" on his back because he was getting booed so much. In retrospect, that's pretty amazing. Heck, at the time it was probably worth a ton of grudging respect.

I think my favorite part about LeMaster is that his defense was kind of the pits, too. He made a lot of errors, didn't turn a ton of double plays, almost always had a range factor below the league average until he was 30, and (obviously, they didn't know this at the time) rarely had positive fielding WAR. He was clearly the worst hitter in the league, he had the dropsies, and his range wasn't supernatural. He played with the Giants for 11 seasons.

He would have turned this site into a compressed ball of rage, a beautiful hate diamond.

Giants player in the game whom I didn't know at all

Gary Alexander hit a pinch-hit homer for the Giants for their only run. It was his last at-bat for the Giants before he was traded for Vida Blue. So, you're saying if Gary Alexander isn't on the Giants, there's a chance that I would hear "1-800-818-5223" in someone's voice other than Vida Blue's? Maybe so, maybe so.

The next year, he hit 27 homers as a catcher between the A's and Indians, striking out a league-leading 166 times in 498 at-bats. That was the sixth-highest total in history back then. Still, a catcher with 30-homer power should have been a valuable thing, but Alexander was out of the league before he was 29.

Check out his minor-league numbers. Oh, we would have been smitten, even if he caught like a limbless Mike Piazza. 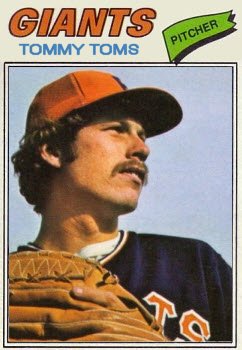