A simple request of the Giants' marketing department

Share All sharing options for: A simple request of the Giants' marketing department

I don't know how the Giants' marketing department works. I don't know if there are dozens of men and women who come up with the promotional giveaways each year, or if there are just a couple of people who generate 95 percent of the giveaway ideas. So while I was tempted to do this in the form of an open letter, I wouldn't know to whom it would be addressed.

But I'd wager something like this happened in the offseason:

Marketing person #1: So it's settled. The last promotion is a "Tim Lincecum Wig" giveaway on Sept. 9. Well, ladies and gentlemen, that wraps up the offseason. We can all go to Aruba now, and …

Marketing person #2: Oh, no. Look, on the extremely popular and well-written Giants-themed website, McCovey Chronicles! A story about Tim Lincecum cutting his hair!

Marketing person #1: Dear god. Get me the president.

Marketing person #1: For the Giants.

Marketing person #1: You see this? We're so screwed.

The trip to Aruba was cancelled, clearly. And right now, there's an entire marketing department wasting away, desperate for one last promotional giveaway to offer.

This is not my idea. Valued contributor thirteenthirteen proposed the idea in a comment thread a long time ago, and Tom Verducci wrote this after the NLCS:

It's all so surreal, like the Serat painting of a tableau in the ninth inning of Game 7: rain falling, the crowd delighting in the soaking, the infield shimmering as if a mountaintop lake, a moat of runoff water ringing the pitcher's mound. ... It was the rain version of a giant snow globe -- a moment a Giants fan can put on their mantle, something to cherish on the worst days of some future sour season or the worst cold snap in the middle of winter when baseball seems far away.

The surreal image Verducci mentioned was this:

So if there isn't time to whip up one of these this year, it will forever be applicable. This is the kind of thing that will still be relevant with a 10- or 20-year anniversary celebration.

This season would be swell, though. Because I need one, and there's no time like the present. Let me reiterate that: I need a Marco Scutaro rain globe at some point in my life. And I'd prefer to have one made and given away for free, to be quite honest. Custom, artisan-crafted snow globes are expensive. If they exist, that is, which they probably don't.

You can even use the mockup that I came up with, Giants Marketing. It took me hours, and I'll just give it away: 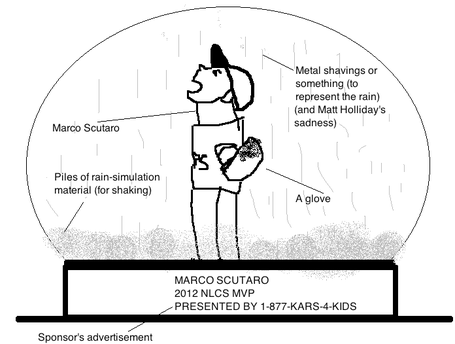 I don't usually make requests like this, but this is the kind of thing that needs to be shared. Spread the word on Twitter and Facebook. Bombard the marketing department with your support for this idea. Try to think of a single reason why this shouldn't happen. Just one. It would be one thing if snow globes were made by force-feeding geese with tubes down their throats. But they're not. There is absolutely no downside to this. None.

So it should happen.

Dear San Francisco Giants: Please design and make a Marco Scutaro rain globe, then give it away at the ballpark. Or sell it. Hell, I'm not picky. I'll buy it. I'll buy 12 of them. This is not just a request from a fringy website. This a shared hope that the universe in which we all live is an orderly universe. This is destiny. Thank you.