Danged if I can get to 13 things, though.

The Giants signed Mason Tobin to a minor-league contract according to Matt Eddy from Baseball Ameríca. I almost want to do a "13 things about Mason Tobin" post, but some of my traditional crutches aren't available to me: 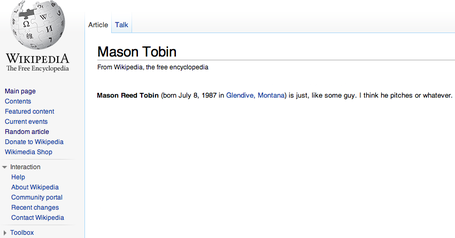 And when I enter his name into my photo tool, I get a guy windsurfing, a broken link, and some dude who was on the Rangers. I think the one we're interested in is the pitcher on the Rangers, with "interested" being a relative term.

But we know a couple of things about him. First, Mason Tobin sounds like a Padres name, and the Padres usually have a good bullpen. That's not a guess; that's proper onomastics, which is like the sabermetrics of names.

The second thing is that the Rangers wanted him enough to take him in a Rule 5 draft, and the Rangers are usually smart.

The third thing is that Tobin's arm went kerflooey in 2011, and he still hasn't come back. At least, not at a professional level. I'm assuming he's been diligently rehabbing and showcasing his arm for other teams, but he hasn't pitched in a game for a while.

The fourth thing is that he's now 25, he's been in professional baseball since 2007, and he's thrown a total of 101⅔ innings:

You know, I hear people suggest that Tommy John should make the Hall of Fame based on his career and place in baseball's medical history. But from what I can see, Tommy John is kind of a dick. Always cutting dudes open, ripping out their ligaments. It's not my place to judge, I guess, but it seems a bit dickish.

But there's something about Tobin that intrigues me. Mainly, the part where a pitching-smart team like the Giants would be interested in him after two surgeries and a total of eight innings pitched since the Giants fielded a lineup with Scott McClain at first, Eugenio Velez at second, and Ivan Ochoa at short.

I think the interest comes from the Giants hitting on Andres Torres, Ryan Vogelsong, and Gregor Blanco in recent years. I did the same kind of uninformed speculation during the tech bubble at the turn of the millenium and ended up with a bunch of FogDog.com stock. Which probably means that Mason Tobin is going to be acquired in a takeover, and he'll be replaced with the shares of a bigger reliever.

Mason Tobin, everybody. You probably won't see him in the majors, but the Giants like his arm, and they're smarter than I am, so we're talking about it right now. Well, some of us, anyway. You're probably talking about the Oscar nominees or lunch or something.