The unbalanced schedule doesn't make a lot of sense during the 583rd Giants/Padres game of the season, but you get it when it's September and the Giants and Dodgers are jockeying for first place. You got me, Bud. You got me this time. You were right about this part. You can stop leering at me now. 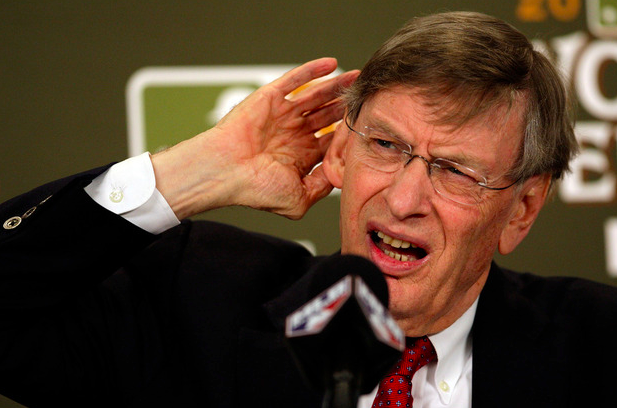 You can stop leering at me now! 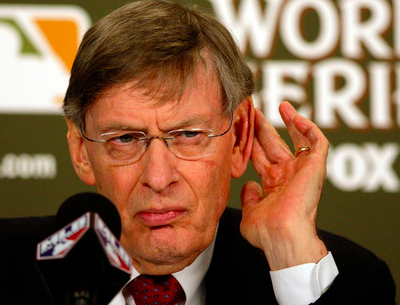 I SAID STOP … oh, you just can't hear me. Sorry about that.

I'm not sure how you get ready for Giants/Dodgers series, whether it's by throwing lamps through windows, screaming profanity-laced words of encouragement at passersby wearing Giants hats, or having a three-martini breakfast instead of lunch. But these series always feel different. Even when the Giants or Dodgers are terrible, these series completely interrupt our baseball routine. There's excitement, tension, anticipation ... it's kind of the reason we watch sports in the first place.

And it doesn't hurt that this has been the weirdest damned season for the rivalry that I can remember.

When it comes to the on-field stuff, it's been a wild season series. Three consecutive sweeps, to be exact. The Giants swept two, holding the Dodgers to six runs in those six games, and shutting them out three straight in July. The Dodgers took one in San Francisco, outscoring the Giants 19-3. I dug through the franchise head-to-head records, hoping to find that three consecutive sweeps was a first, but it's not. The same thing happened in 2007. Brad Penny defeated Noah Lowry in the first game between the two teams that season. That sentence brings up about as many negative thoughts as you'd expect.

But the off-field stuff has been even wilder. I used to play Baseball Mogul, a baseball simulation game, and one of the most challenging things about it was that the Dodgers would always turn into a financial behemoth. It'd be 2018, and they'd have a $300 million payroll, with seven starting pitchers making $20 million or more, just in case. It was frustrating. "That's not how baseball works," I'd scream at my computer like the well-adjusted non-nerd I clearly was.

Well, say. About that. I should probably apologize to the good folks at Baseball Mogul. They were coding the future. Check out this article from last year. I almost felt sorry for Dodgers fans.

Here's hoping that new owners come in and treat the Dodgers like the financial powerhouse they should be ... and finish one game out of the playoffs every year because of something baseball-related.

Remember those days, when the Dodgers were a scrambling, bankrupt mess? People were making Dodgers jerseys with "Chapter" as the player name and "11" as the player number. Adorable. But now we know why the Giants were working on a rainy-day fund. It's because the Dodgers have super-villain money, and they're going to develop a weaponized weather machine. It's, like, the first thing they do.

So not only has the rivalry seen a bizarre back-and-forth season series, but the entire financial paradigm of the rivalry shifted in the middle of the season. The Dodgers spent the offseason screwing around with Aaron Harang. They'll end the season with the expensive half of the Red Sox' roster.

I kind of expected the Dodgers to be rich again one day, and I guess it's not that surprising to see a few sweeps go either way. You'd get the same things with coin flips. Adrian Gonzalez in a Dodgers uniform is going to freak me out, though. I think that's what puts the season over the top and makes it the weirdest Giants/Dodgers season I can remember

This isn't the first time the Dodgers suddenly and unexpectedly nabbed a feared superstar to hit in the middle of their lineup. Gary Sheffield was one of the scariest hitters in baseball when the Dodgers got him. So were Shawn Green and Manny Ramirez. But Gonzalez was different, in that he's already terrorized the Giants for years. I was so thrilled to have him out of the division. And not only is he back, but he's with the Dodgers. I always respected and feared Gonzalez, but I never disliked him. No time like the present, I suppose.

In this case, "strange" has some serious potential to be synonymous with "completely awesome." Because this has been a swell season, with ups and downs and a great Giants/Dodgers rivalry. It can't be synonymous until the Giants win the stupid division, though. I'm not that magnanimous.

Hitter to watch
So Adrian Gonzalez is an obvious candidate, but do you realize what happened since the last time the Giants and Dodgers played? They traded for Shane Victorino. What a perfect marriage of bacteria and growth medium. When he arrived in the Dodgers clubhouse, a clubbie handed him his new uniform. Victorino just laughed, tensed up a bit, and made a couple of grunting sounds. A Dodgers uniform oozed out of Victorino's pores and enveloped him. No need for that uniform, good sir. It was under there all along.

Pitcher to watch
I hope Josh Beckett is legitimately bad now. There's a chance that he's in a bit of a rough spot right now, and that he'll rebound to be the pitcher he was in 2009 and 2011. But I'd like to think he'll be a guy that will hang around for the next couple of seasons, never being so bad that the Dodgers will eat the money and release him, but never been good enough to make them think anything other than, "Dammit, this guy again?"

Their Zito, then. I hope that Beckett is their Zito for the next two years.

Starting tonight. And I hope the Giants' Zito is the A's Zito this weekend. I have a lot of hopes, really.

Prediction
Eli Whiteside hangs Victorino from a flagpole by his underwear. At least, that's what should happen.