The Future of Brandon Belt's Power

Share All sharing options for: The Future of Brandon Belt's Power

The Brandon Belt arguments have evolved, as I wrote a couple weeks ago. Instead of expletives, nasty words, and John Bowker references, we can at least start with the premise that Belt clearly has some sort of identifiable talent. Whether it's enough to be an average, good, or great first baseman is a different debate. But it's not … wait, lemme find a comment from an old SFGate article:

Belt is just another name that nobody will remember in a year to two. There have been quite a few like him, since J.T. Snow retired. The Dodgers made a deal last night with Miami, bringing in a a hitter and a lefty reliever. Sabean can pull the trigger, and bring in some help, or he can play stinkfinger and do nothing.

Yeah. It's cheating to use a random quote from an anonymous user on the great unwashed Internet, but as an example of the level of Belt-related discourse, it'll do fine. I don't get the stinkfinger part, either!

No more. Belt can get hot and cold like other hitters, and we can just talk about Brandon Belt, standard baseball player. Feels good, man. And today's question is simple: What kind of power should we expect from Belt? My temptation is to take his spray chart and do something like this with it: 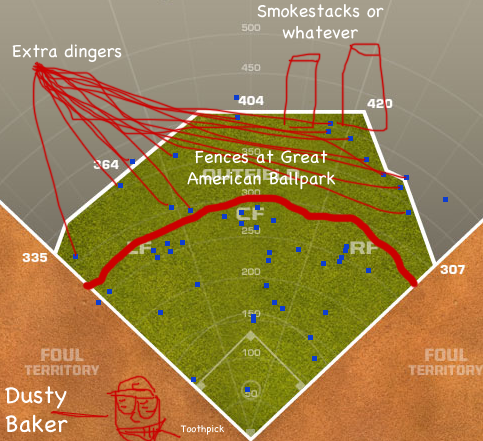 Look at all those sweet, sweet extra dingers he'd have anywhere else. At least, that's what I want to say. But it's impossible to know with any certainty. He's probably missed out on at least a couple of home runs because of AT&T. But he was never supposed to have extensive power. His isolated power was never that great in the minors, despite him playing in the California League and the Pacific Coast League:

From Baseball America, when they ranked Belt in their top 50 prospects:

His power is through the middle of the field, and he should be good for at least 20 homers a year. His ability to make consistent hard contact could provide the Giants a left-handed version of Buster Posey in the very near future. Belt is built like a beanpole but has no glaring weaknesses.

I'm pretty sure no one here was expecting Belt to be Prince Fielder. We were never led to believe that Belt had light-tower power of the josephest kind, but I wasn't expecting Rafael Furcal-like power. Is that 20-homer power still possible?

My first caveat about this season is that the power is weird for everyone at home this year. Pablo Sandoval as three homers at home this year. Buster Posey has five. The whole team has 21. It's September 5, and the Giants have hit 21 home runs at home this entire season. That's just ... odd. It's what's behind the crazy single-season park factors and the low OPS+ totals, and it probably means it's not a good idea to read too much into the power numbers of any Giant this year. Whether it's weather-related or random variance, something's off this season, and I doubt it'll show up again next year.

The second caveat is that Belt is still young, still learning. He's just 24. The player he is now isn't a finished product, and I trust that when he gets more comfortable, his crazy discipline will help him run into a few more homers in subsequent seasons.

A handful more because of a fairer AT&T, a handful more with added strength and experience, and I'd wager Belt can easily be a 15-homer guy. The 20 suggested by BA isn't out of the question.

How productive of a first baseman that makes him, of course, will be measured by how well he does the other things. Call it the Kotchman/Olerud Scale. The walks, the average, the doubles ... will all that make up for power that's on the below-average side for a first baseman?

I'm a fanboy. So I say yes. Belt has more power than Gregor Blanco. We'll get to see it soon. And in the meantime, we'll have this to keep us warm:

Again, consecutive frames. That bat's moving quickly when he's right. He'll be fine with the power, if perennially underrated. But if the area grew to love J.T. Snow, the trails have already been blazed.