Source: Game of the Year Candidate Withdraws From Contest After Series of Gaffes

Share All sharing options for: Source: Game of the Year Candidate Withdraws From Contest After Series of Gaffes

In the bottom of the eighth inning, the Giants walked the leadoff hitter. He moved to third on an infield single/error combo. Then Bruce Bochy used my least favorite strategy -- the walk-the-bases-loaded gag. It wasn't just any walk-the-bases-loaded gag, either. It was a) with one out, b) to bring Santiago Casilla into a situation where he had to throw a strike b) against Justin Upton. That's like splitting a pair of rules cards in a back-alley game of blackjack. Everything about that inning was horrible and incorrect.

They got out of it. Oh, how they got out of it. And for the first time since the World Series, I figured Bruce Bochy was in his clairvoyant fugue state again. You remember the one. Start Edgar Renteria and Juan Uribe over Sandoval? Of course it worked. Bring in Affeldt in the third inning of the NLCS? Yep, not a problem. I'm not sure he made a bad decision in the playoffs, whether by acumen and goofy luck.

Except, well, that inning was awful, but it's hard to blame the offense on a night when the Giants scored six runs. That's a series worth. It'd be easy to blame Joaquin Arias and Hector Sanchez because … well, because they really, really screwed up. But those at-bats were just a part of a melange of dammit that included the bad outing by Ryan Vogelsong, the unfortunate two-strike pitch Javier Lopez threw to Jason Kubel in the 11th, or the antennae-twisting route of Hunter Pence as he went after Kubel's ball. There were all sorts of ways to be frustrated with that one.

That could have been, with a Pablo Sandoval home run in the ninth or 11th, one of those games you could reference in 20 years with a single phrase. The Joe Morgan game. Brian Johnson game. Bob Brenly three-error game. Ruben Rivera. The Giants didn't win a championship after any of those games, but the individual efforts still meant a helluva lot.

Instead, it was just a game. An exciting game. One that makes you remember what it's like to be a rabid, partisan baseball fan, and one that might have led to the wreckage of your flat screen smoldering outside the window of your North Beach apartment. But it was an entertaining game. When Belt hit that home run, by golly, I was sure something special was going to happen. I think it was just gas. I took an antacid.

Also, it's easy to be magnanimous and awed with the splendor of baseball on a night when the Dodgers lost in extra innings, too. That helps.

Still not worried about Vogelsong just yet. He's pitching like first-half Lincecum right now, and I mean that in a back-handed-compliment kind of way. He's getting killed with two outs -- that's the third time in the last four games that he's given up a two-out, run-scoring hit. His batting average on balls in play over his last five starts: .525. That's 37 hits and 31 strikeouts in his last 96 at-bats. That's hard to do, and harder to sustain.

It's a little weird that his good luck ended with such a dramatic thud, and that his bad luck began with such an easily identifiable start point, but I'm still going with the answer still being in the middle.

Ryan Vogelsong: "I feel good right now. I feel better at this point of the season than I did last year. It's just about making pitches."

Yeah, I'm with that. The pitcher is the same. The results aren't what we're used to. He'll shake it. Two years ago, the guy was playing in a Namibian independent league with an elbow filled with spray foam insulation. He's bounced back from worse.

This seems like a good way to end it: 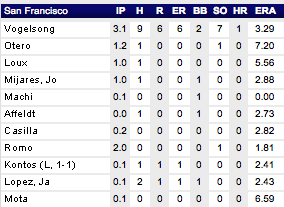 That's a franchise record for pitchers used, and it ties an MLB record. What a stupid and fantastic game.