Bumgarner isn't happy with his mechanics. Vogelsong is struggling with his two-seamer and command. Lincecum can't stop walking people. Zito is winning over the hearts and minds of Giants fans everywhere, and if you give him another six seasons, he just might complete the job.

It's something of a common trope around here to type "Matt Cain" and let it stand alone, just stuffed with meaning. That's because I can write "Matt Cain is an excellent pitcher," but it seems redundant. It's like, "The cereal factory is a factory that produces cereal for people who want to purchase cereal." So many unnecessary words. When you type "Matt Cain," it stands for something. Innings. Control and command. Strikeout stuff when it's called for. Baseballs that don't leave the yard. Annoyed fans of other NLWest teams. You know, Matt Cain.

It'd be nice if the rotation was filled with a bunch of badasses like it was in 2010. But they adjusted the sliders on this particular video game, so now there's a little bit more of an offense, and there's a rotation that's a little less awe-inspiring. But Matt Cain's still around. He's just as good as he's ever been. He's better, even. He set a career best in strikeouts for a season on Wednesday night, and he's going to demolish his career-best walk rate. He cuckolded xFIP, and he threw the bastard children into a volcano in exchange for improved command.

Maybe that last part was a bit strong. Matt Cain.

My favorite pitch of the night, if not the month, was Cain's 0-2 pitch to John McDonald. 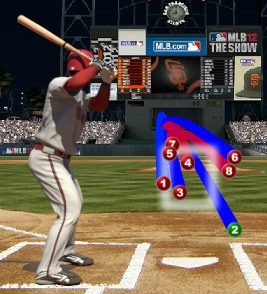 McDonald was playing some sort of carnival game, fouling off pitch after pitch after pitch, hoping that Cain would eventually get bored and wander off. The last pitch was perfect -- a fastball with movement, curling over the outside corner at just the last second. It was so good, that even a guy with no intent to drive the ball missed it. All McDonald wanted to do was make contact. He was looking for any kind of contact -- good, bad, just put the ball in play.

That pitch was so perfect, though, that it crossed the should I/shouldn't I threshold too late for McDonald to do anything.

The Giants used to go into every postseason like this, you know. They'd have a guy -- if they were lucky, mind you -- and then a bunch of people who'd make you nervous after that. Jason Schmidt! Sidney Ponson. Kirk Rueter? Jerome Wi … wait a sec. The difference is that you still trust Bumgarner more than you trusted Ponson, just like you trust Vogelsong more than Rueter, and Lincecum more than Williams. And Barry Zito. No, this isn't the 2010 rotation, but it's still a good rotation. And it's led by Matt Cain.

The best part was that he got to leave after seven strong innings. There wasn't an urge to keep pitching him because the Giants were still in a race.

He also had two hits, a run scored, and an RBI.

Matt Cain, that is.

That was the 28th game with two hits or more that Marco Scutaro has had in his Giants career. That's more than Cody Ross, Pat Burrell, and Miguel Tejada. It's one fewer than Jeff Keppinger and Carlos Beltran put together. It's as many as Mark DeRosa, Brett Pill, and Joe Carter put together. It's more than Skeeter Scalzi, Ebba St. Claire, Jigger Statz, Van Mungo, and Tookie Gilbert. That last sentence is completely legitimate, by the way. All of those players were Giants, and none of them had has many two-hit games as a Giant as Marco Scutaro.

Willie Mays had 900, as long as we're counting.

But Scutaro has played only 55 games in a Giants uniform. Every other game, on average, Marco Scutaro gets at least two hits.

Cool. How's that Hanley Ramirez deal working o … right, right, sorry. No, it was an honest mistake. Yeah, I can see how you'd think that was on purpose, but … nope.