Of course I love the 2012 San Francisco Giants. They won. I can't imagine watching a Giants team triumphing after 162 games and thinking, boy, those guys are a bunch of jerkfaces. Can't root for these guys. So it's almost redundant to talk about how likable they are.

But, yeah. This is a supremely likable Giants team. Not for you, depressed fan of another NL West team, who decided to shuffle over here out of some weird sense of self-loathing! You don't find them likable! But we do.

This is an overflow thread that features a couple of GIFs.

What was Affeldt doing? Kidney jabs? Titty twisting? Cup check? We'll never know. We just know that he chose to do it at the perfect moment for maximum trolling, and he picked the guy who might be a little more business than party when compared to the rest of the team. 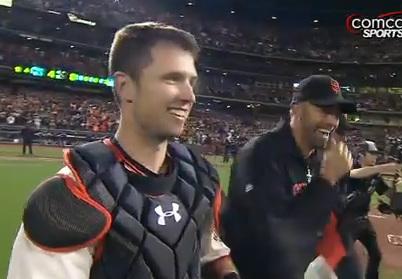 D'awwww, it all worked out.