The Giants' best chance to stay in the game tonight was the top of the 4th when Cabrera and Posey reached to lead off the inning. Pence battled before flying out, Marco Scutaro nearly hit into a double play, and then Brandon Belt almost politely grounded out on the first pitch he saw, and that was the game. Only Buster could muster any sort of attack. His Manifest Destiny of the National League coming out of the break has been a glorious sight to behold. Maybe we should just talk about him. He's been pretty good. Yeah... Buster Posey. Always on topic.

Sometimes you look bad winning, look good losing, dominant in victory and pathetic in defeat, and sometimes you just face off against someone plainly better. That's what happened tonight and all you can do is shrug it off and lower expectations for the rest of the series. The Giants aren't a bad team, but Jake Westbrook threw 74 pitches tonight and handcuffed every Giant not named Buster Posey, Melky Cabrera, or Angel Pagan. Between that and the Cards' offense, it all looked pretty effortless for the opposition. Meanwhile, the Giants struggled in every facet of their game... again.

This is the part of the job I hate the most. Matt Cain was terrible tonight. The home runs continue to be a problem and he just doesn't look Cain-sharp. Maybe he flew too close to the sun. Maybe Matt wasn't supposed to be perfect in performance, maybe the perfection was in his flaws. But now he's The Guy, but since the perfect game he has not really been The Guy. He has been a Dave Coulier impression of The Guy.

Then again, the Giants starting pitching during this last turn through the rotation has been a blurry facsimile of each starter. Cain had to throw 31 pitches to get through the second inning tonight; Lincecum had a 36-pitch first inning yesterday; Bumgarner's last start was a series of 20+-pitch innings; Vogelsong piled up pitches quickly, too; and, Barry Zito gave us the Zito Mid-Season Scramble (36 pitches in his first inning). Success is always going to come down to the pitching, but there's a bit of a difference between two starters being bad and the whole staff going full Coulier.

I suppose it's just one game and the result of this one is no guarantee that the next three will turn out the same, so, maybe I (and the rest of us) should just shrug it off and tell ourselves it'll all be better tomorrow. Yeah, that's the ticket. Say, why don't we focus on the positives from this game:

Oh hey, Carlos Beltran. I see you there, throwing out Brandon Belt. I think there's something ironic about what happened here. Or ludicrously tragic, like when a clown dies. Maybe I can't quite put my finger on the emotion, but boy howdy does this make me feel funny inside.

It's not really that Belt got thrown out (Brandon Crawford *was* on deck, after all), or even that it took a perfect throw from Carlos Beltran to nail him (he *is* Carlos Beltran, after all), it's really more that it's the guy the Giants should've committed to this offseason throwing out the guy they should be committing to right now. And then, one guy's name is Belt and the other guy's name is Beltran. That's a brain tickler.

Okay, so maybe this wasn't a positive for the Giants, but it was a positive nonetheless. Carlos Beltran is a great player and it's fun to watch him smack the crap out of the ball, field, and run the bases like he used to and so *that* is a positive. And, hey, at least Brandon Belt got a chance to start. 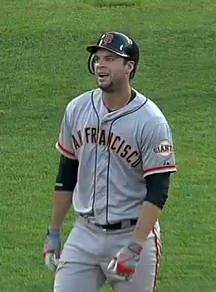 Oh hey, Brandon Belt. Listen, buddy, I know you've had a rough go of it this year. I mean, really, 2012? More like 20-HELLve, amirite? But seriously, even if your shoulders slump don't be a hump. Keep your chin up and go get 'em next year.

Because, really, this is a lost season. His good streaks are wiped out by bad streaks and if I didn't know any better I'd swear his last name was Murphy, because it seems like anything that can go wrong does go wrong.

Yeah, I'm tired of coming up with a new opinion of him every game or after every series, so, like with Lincecum, I've decided to settle on this is who he is going forward and maybe next year will be different. He didn't do anything bad tonight, really, but when you see enough of the silly stereotypes about him reinforced ("Slumpy shoulders!" "Not clutch!") it's enough to just want to write the whole year off as a loss.

And that's all tonight's game really was: a loss. A stinky, dumb, terrible, hard to forget, but maybe it should be easy to ignore, but still a big letdown, and oh-my-god-I-hope-this-isn't-a-portent-of-things-to-come loss.