Giants Come Back In Ninth, Gain Game Against Dodgers

Share All sharing options for: Giants Come Back In Ninth, Gain Game Against Dodgers

Before you do anything else, think of the Dodgers fan who was scoreboard-watching when the Astros took the lead.

If you looked at the Astros from certain angles, they looked like a normal baseball team. Bud Norris had good stuff, and he made smart hitters like Buster Posey look bad at times. The Astros defense made some good plays.

You've watched bad teams. You might have even watched 162 games of a bad team, and then followed that up with 162 games of another bad team the next season.We like to complain about the 2008 Giants. That team lost 90 games, one more than the Astros this season. You've never seen anything like the 2012 Astros.

Which, again, is a team that's good enough to beat any opponent when things break right for them. So don't get too cocky or giddy. Don't forget the Wild Card-leading Baltimore Orioles lost a game to the Manatee-Sarasota State College of Florida Lancers this spring.

But to lose 45 out of your last 53, you need to have something more than a bad team. You need to have the universe be really, really angry at you. The two things that made me realize the Astros are cursed:

The Astros had two outs and a runner on second. Nothing about that play makes sense -- why Sandoval was taking that angle, how he managed to reach back and even touch the ball, how he could have possibly made the decision to flip the ball instead of catch it, and how Brandon Crawford could react so quickly.

And it all happened in a split second to rob the Astros of an at-bat with a runner in scoring position. Amazing.

2. The Astros had a rally killed when a runner fell for the fake-to-third/throw-to-first move
When was the last time you saw that? Honestly, I don't remember. I watch at least 200 baseball games a year, and I'm almost certain I haven't seen that for years. Even then, I'm not sure I've seen it since Bonds. No one falls for that. It's annoying.

The Astros fell for it. Specifically, Tyler Greene, who is now worth 2 WAR to the Giants this year. He's the hipster Brooks Conrad. I love the hesitation before he takes off again. "Nope, nope. First instinct was right. He's really throwing home or to third or aw crap."

That play cost them a runner-on-first, one-out chance, and when the inning ended, the Astros had to be satisfied with their one-run lead, even though they had a funny feeling about this.

I'm not going to pull the "the Giants didn't win tonight; the Astros lost" card. Matt Cain was good, Angel Pagan hit the team's first home run of the season, and Joaquin Arias crushed that double. But the Giants survived a leadoff walk in the eighth that scored on a passed ball. They had one hit with 12 at-bats in scoring position, and that came on a broken-bad doink that barely left the infield. They didn't play their best baseball tonight.

The Astros didn't either. In fact, the Astros played worse baseball better than the Giants, who played bad baseball kind of nondescriptly. That doesn't make sense, but run with it. You don't know how to describe it, either.

At some point, Hunter Pence is going to stop being terrible, and we're going to look back on this and just laaaaaugh.

Tim Flannery sending Brandon Belt in the ninth was negligent. It worked out, so we're all giddy about picking a game up on the Dodgers. But hopefully that punch card was filed away so it doesn't happen again. Here's when the CSN cameras cut from left field to Belt running: 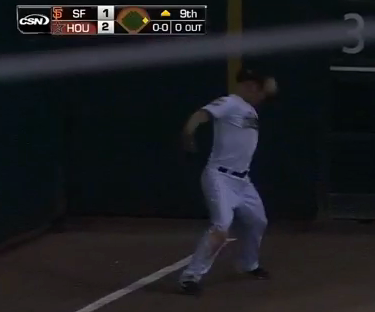 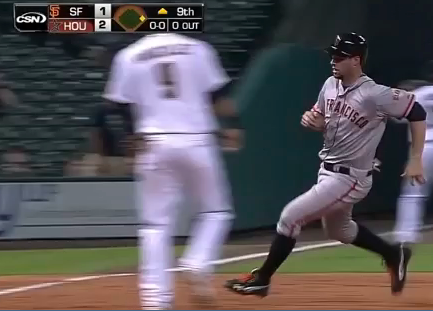 There would have been runners at second and third with no one out. And who knows? Maybe the Giants wouldn't have scored at all that inning. Maybe Crawford strikes out and Sanchez hits a different kind of pop-up.

Joaquin Arias entered the game with a 101 OPS+ and an even win over replacement, which is better than Alexei Ramirez, Cliff Pennington, and Maicer Izturis, all of whom I wanted the Giants to overpay for in a trade this past offseason.

Arias has raised his OPS over 100 points this month, and he's 22 for his last 51, with five doubles, a triple, and a homer in that stretch.

Look, I don't know either. Don't forget, though, that people used to really, really like Arias as a prospect:

That isn't to say he's figured it out, and he'll be challenging for a starting job soon. But he sure looks like a qualified utility player, and he's in the middle of a hot streak at the right time.