Share All sharing options for: Giants Show Off Before National Audience, Score Run

Tim Lincecum did a lot of things wrong in the first inning. He threw 32 pitches, and more than a few weren't where he wanted to throw them. But in the collective sense, Lincecum did three things wrong: He walked two guys, and he gave up a well-struck opposite-field single. And, of course, he allowed a bloop single and an RBI fielder's choice on a ball that was hit too poorly to get a double play. It all added up to two runs.

Instead, Lincecum threw far too many pitches and trudged back to the dugout, head down and tired.

In the next half-inning, the Giants saw seven pitches. The last at-bat of the inning was Pablo Sandoval, who had a perfect chance to step out between pitches, adjust his gloves, call for time, step back in with his left arm extended as if to say, 'Hold on a second, blue" -- anything to buy Lincecum as much rest as possible. Sandoval instead grounded out on the first pitch. That was like having a talk with an employee who goes to the bathroom with the door open. You really thought they would have figured that out on their own.

Sometimes baseball is weird, with Brian Johnson home runs and Barry Zito shutouts in Coors Field. And sometimes baseball is a boring story that you've heard 50 times before, and wasn't even funny the first time. Tonight's game was like a crowd sourcing project -- yeah, this was the most likely result of a matchup of Tims Hudson and Lincecum. The Giants would make weak contact early in the count against Hudson, Lincecum would struggle early and settle down, and the ESPN announcers would get a $50,000 bonus every time they used the word "shadows."

Yep, sometimes baseball is weird. And sometimes it's scripted and annoying.

One thing I did learn from the ESPN broadcast, though, is that the Dodgers made some sort of trade. I'm a check that out and write something about it.

Wait, crap, you want another angle to the game? Uh, let's see … nope, wrote that before … nope … that's old news … that's something you know … Chipper Jones playing his last game in San Francisco is, yeah, you know, well, say, about that ... nope ... yacht racing ... Tim Hudson with two hits and Paul Janish with a two-run double ... panda hats ... Clay Hensley ...

Today was game #128. That was legitimately the most unsurprising, uninteresting game of the season. There was a complete dearth of interesting angles to that game.

Wait: As I wrote that, the camera flashed to a Braves bullpen catcher with the last name of "Butts." That's interesting! 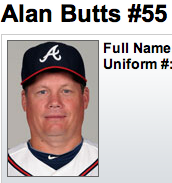 There we go. But as if the night couldn't get any worse, I just spent 20 minutes thinking of a joke that could "butt" and "#55", and I failed. Failed so hard. Even the post-game threads suffer when the games are this tedious.

Oh, and when I was paying the pizza guy, the Braves scored two more runs somehow. Cool, cool.