It was a bad, bad, bad, Everth Cabrera game. It was a Clayton Richard game. It was so Amarista it's not even worth talking about. The venable Ryan Vogelsong was chaseheadley'd early in the game and, carlosquentinly, the Giants found themselves in another early deficit. It was the second consecutive "less than five and dive" start for Vogelsong. It's worth getting hysterical about if you've been holding your breath for some sort of tragic regression for the prodigal prospect. Otherwise, the way I saw things, it was an unlucky start, one that people were all too willing to label Tim Lincecum's disastrous starts early in the season. He didn't look out of sorts, he just couldn't put guys away. His stuff, his command, his velocity all looked normal from my vantage point.

He couldn't put Everth Cabrera away in fewer than 13 pitches. He couldn't get his secondary pitches going as a result, because he had relied on the fastball exclusively for that plate appearance. The home plate umpire didn't give him any of the close pitches in the first 5-6 pitches, either, and then Everth did a great job fouling off pitch after pitch. And it was really hot and he had to stand out there on the mound for a very long time dealing with this nuisance. He struck out the side, eventually, but it was hot and he was heated, then fuming, then he simply blew a gasket. It was a terrible recipe that led to a bad inning which, unsurprisingly, determined the outcome of the rest of the game. Simply put: it was very unlikely Ryan Vogelsong was going to recover and have a great start after that first inning. We've seen him recover from shaky innings and even shaky starts, so it's actually pretty easy to argue that he was "due" to not recover as usual.

The Everth Cabrera Experience led to an event that I think played a big hand in permanently flummoxing Vogelsong. Join me on the other side of the jump to discuss. Leave these regressionists to their pillow clutching.

Will Venable singled to left field in the first inning on the second 90-mph fastball to the outside corner Ryan Vogelsong threw. He had gotten strike one with it and Venable was waiting for it when he threw it again. The first two plate appearances drew some very questionable pitch selections by Vogelsong and Posey: 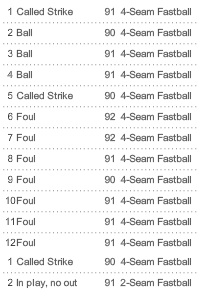 I'll concede that Venable's hit wasn't the exact same pitch Vogelsong got strike one off of because the chart says it wasn't, but my eyes told me the opposite. Fine. My eyes suck and that's why we use other evidence to verify or refute what we think we saw. But what my eyes did see, irrefutably, was Buster Posey taking a pitch command from the dugout.

After the first pitch fastball to Headley in the plate appearance following Venable's, Vogelsong threw his first breaking ball of the afternoon. This led to a successful stolen base attempt by Venable. It's clear that Venable read the pitch command from the dugout based on Buster Posey's head movements and knew from the first few batters (himself included) that Vogelsong had only thrown fastballs. He figured the next pitch would be something slower than a fastball, one he could steal on, and his attempt was successful as a result of that.

13 pitches to put away Everth Cabrera (who had 3 hits today and 5 for the series after having only 8 hits in 51 plate appearances in the month of August), a hit, a stolen base, and then Headley and Quentin to contend with, a hot San Diego sun, a fast ballooning pitch count, and it was only the first inning. It's no wonder -- NO WONDER -- Ryan Vogelsong's start was blown to hell.

I wonder how many other Giants would've been at second base after Will Venable's drop in the top of the second inning. Buster Posey is an American hero, a smart baseball player, and a guy who hustles. That's the only explanation for why a guy who regularly gets pinch ran for by Eli Whiteside was able to get to second base on a pop up drop. I don't mean to impugn the characters of other Giants players, but I am of the strong opinion that only Buster Posey could've hustled like.

And I forgive his 0 for 4 because he had to sit out there in the heat through those long innings, too. Catching and pitching in that kind of heat against these slappy, pesky, oddly named baseballers not only leads to biological exhaustion but emotional headaches. It's frustrating to get slapped around by the San Diego Padres, I'd imagine. Having graduated from several Catholic schools, I can say that getting slapped around by actual padres is character-building.

So now it's the Dodgers they must face, but when they're behind in the standings. The starting pitching has vacillated between "Eh, it's not so bad" and "Oh my god, what are you doing?" for most of the season so it'd be nice if the arms started getting hot like the bats have been doing of late. I mean, if Hunter Pence *really* wants to become a member of the team, he'll beat the Dodgers in dramatic fashion, but if the Giants really want to win the West, then the starters are going to have to dig up some 2010 and/or 2011 impressions of themselves. I think the team knows that just as well as we do, I'm just mentioning it now because I'd really, really like to forget about today's terrible game in which terrible things happened because terrible players weren't terrible.

For the second consecutive season, a Cabrera kills the Giants.