I wrote about Justin Verlander for my morning post over at Baseball Nation. Spoiler: Justin Verlander is good at baseballing. He throw ball good. Specifically, last night he snapped had a string of 63 straight starts where he went six innings or more. The streak was snapped because of a rainout. They called the game after five innings.

It's especially hard to comprehend after watching a game like tonight. You know who's good at baseballing? Matt Cain. He's pretty much the best. But he's a pitcher, and he can have games like tonight, where he can't make it into the sixth. He's not invincible. He can have games where his release point is off, where his mechanics are wonky. This isn't even a caining, losing 2-1. He deserved worse, from the Gregor Blanco catch, to the hard-hit balls all over the outfield. This was a two-run outing on a technicality only.

Since the perfect game, Cain has been pretty ordinary. He's allowed nine home runs in those eight games. There is no correlation between the two, but it's an easy demarcation line. If you've thought something's been missing, you've been right.

But if you thought Cain was going to have a 2.18 ERA all season, you weren't thinking clearly. He's never going to be 1968 Bob Gibson. He needs to be fine to get his outs, and it's a tough task for pitchers to be fine every time out. That Verlander guy? He throws 100 m.p.h. in the ninth inning. He'll have nights where he's not fine, and he still makes hitters look like they're swinging a bassoon. Cain doesn't have that. He has some wiggle room, though -- that's how he gives up two runs in five innings without his best stuff.

I will make you a promise, though. If all of a sudden Matt Cain is broken and Tim Lincecum is fixed, I will hunt you down. Yes, you. I don't know how it'd be your fault, but it would be. So you and I … we're in this together. Here's to a good Cain and good Lincecum showing up at the same time.

This is the start of the Hunter Pence era, as you know. 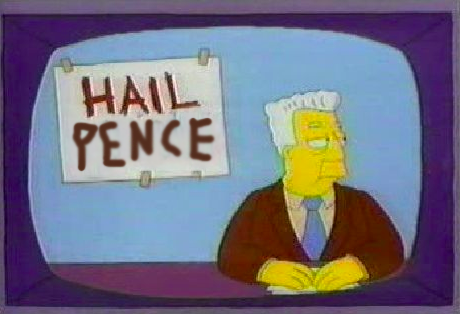 As an experiment, I decided not to mention anything about Pence looking ... off. Nothing about bugs, aliens, insects, or insects to my wife. Thought I'd just watch the game with her, and see if she brought it up.

CSN Bay Area was very accommodating, keeping the camera on Pence at every opportunity. Through the first two innings, though, she didn't say anything. She didn't notice. Is it just us? Is it just something that only baseball nerds pick up on?

Then, during his second at-bat: "This guy has Bart Simpson eyes."

My mom and dad are on a train right now, on their way to Colorado to watch the Giants on the road at Coors. They didn't have wi-fi on the train, so my mom was texting me for updates. One of those updates:

How does Pence look?

How do you answer that? How can you fit that in a text? That's a Lovecraft novella, not a text. So I responded with, "That's a hard question to answer. You've seen Pence play, right?"

He drives Dad nuts. He says he never blinks.

Vindication. It's not just us. But I'll say this: I'm excited to watch Pence. Not necessarily from a production standpoint, because he's not that different from what the Giants were getting out of their outfielders this year. He's better, but he's not a middle-of-the-order dynamo. He'll improve the team, eventually.

But he's different. We've watched a lot of ballplayers come through here, and none of them have been anything like one Hunter Pence. He's kind of freaky. He's our kind of freaky now. That's what fandom is all about. I can see us getting attached to him.

Be cool if he'd hit something, of course. There's time for that. The guy has to get over his saucer-lag first, you know. Tonight didn't work out, but I'm still looking forward to the Hunter Pence era. He's entertaining, folks. He's entertaining.