Share All sharing options for: Giants Look Like That Pink Glop They Use to Make McNuggets With Against McDonald 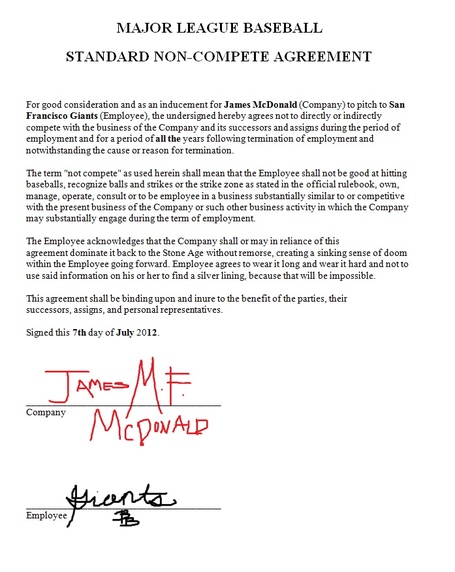 I can't believe Bruce Bochy would sign this in good conscience, but it would seem as though he had no other choice. Somehow, Clint Hurdle and his thugs were able to force this piece of paper in front of him and induce him to put his signature on it. If this had happened in New York or even St. Louis, the baseball world would be turned upside down. But it appears the good Commissioner turns a blind eye to the criminal doings in non-playoff cities. A sad state of affairs. Sad indeed.

Of course, Clint "Capone" Hurdle's plan would've flopped had James McDonald not dominaced (looking like an ace while dominating) the Giants. He was magnificent. He stood on that mound and conflustergated (confused + flustered + castigated) them. He stood in the batter's box and on based them. That ball four was really a strike. At least, I'm pretty sure it was. MLB Advanced Media is a stellar organization but MLB.tv could stand to be more consistent. I mean, it could stand to work. Anyway, back to McDonald...

He changed speeds and eye lines and hit spots like he was orchestrating a symphony. There was very little the Giants could've done to have scored against him and I say that because they did not look like they would've scored more than 1 run (and they wouldn't have even scored that one had it not been for a wild pitch, which was really McDonald's sole mistake) against McDonald at any point in the rest of their lives. Put it another way, if James McDonald pitched all three games of this series, today's run would be the only one the Giants would back their way into. He owns them. Let us all take the Internet's advice and deal with it.

Pablo Sandoval and Brandon Belt looked completely terrible in totally different ways. Pablo seemed to have been all instinct and Brandon Belt seemed to be all thinking. Now, Pablo is not a caveman and Belt not a philosopher, but they were both dumb in completely different ways. Well, they looked really, really stupid up there, anyway. Maybe it's not so much the extremes of all swing / all guess (after all, the Giants struck out 13 times today), but maybe their respective inability to pick up McDonald led to radically different outcomes. That means the root problem was that James McDonald was just completely dominate (which, as the contract above indicates, is exactly the case) and there's nothing to "worry" about with these guys.

Still, though, Pablo Sandoval and Brandon Belt did not look like major league baseball players in the batter's box today. Sometimes that happens, but when these guys in particular have such days, it's a bit harder to forgive them for running into a Colossus like McDonald and easier to assume there's some backsliding happening in terms of their plate approach. I'm being tougher on them than the rest because the Giants, ultimately, need them more than the rest (Melky and Buster excepted from both instances, obviously).

All in all, a pretty wackluster (wacky + lackluster) day.

I would be grossly negligent in my $500 per post duties if I didn't fire up the ol' Vogelsong Praise Machine.

He didn't have his sharp stuff today and was a little bland on the control, but he was still decently effective (the Pirates are still a bad enough offense that surrendering three runs does not a "typical" start make) and he didn't really blow up. That dreadful rain delay which only served to drag out this game by about 30 minutes could've been the end of him, but we're learning with each start that Ryan Vogelsong is a heartless, rampaging cyborg on the day he pitches. His default pitching demeanor is RAGE. If anything, water falling from the sky only upset him more.

But the Pirates made him pay for his mistakes. McKenry and Alvarez did some damage and even though McDonald's walk was actually a third strike (I will fight you if you present evidence to the contrary, such as your own wrong opinion), his single later on was a solid hit off a fastball left up in the zone. He didn't have Lincecumean bad luck on his mistakes, but he made enough of them that it doomed the Giants on a day when they were not going to get more than a run.

That part is not awesome, but it is hardly worth sounding the alarm. Still...

Losing turns me into a rampaging cyborg. Now go enjoy your Saturday.