Share All sharing options for: Giants Get 12 Hits (or 12 Padres Wins vs. The Giants) in Win vs. Padres

Brandon Crawford was ejected from tonight’s game and it felt like watching an episode of Family Guy in high-definition for the first time: I recognized what was happening as familiar but the clarity of the image for something that’s been decidedly mediocre (at best) shocked me. Is it possible that Brandon Crawford has, within the last week, become a bigger voice on this team? Is he more than just a pretty face? More than just a can’t-field-on-Arizona’s-fast-infield shortstop who occasionally hits doubles and grand slams?

Is he a thing? I think he is a thing.

The Giants expected very little of him after just handing him the starting shortstop job in Spring Training (sort of how you have two dogs but then your favorite dies and so you’re left with the living one which is okay, I guess, and maybe sometimes it reminds you of the one you favored, and because of that recollection you sort of bond with the surviving dog in a whole different way) and he’s done exactly what they expected of him. But now… in the heat of summer, in the middle of a pennant race, this recent grand slam and the fancy glove work and the getting fired up because of a bad umpire’s bad call… I think he’s a thing. I think… he’s really a part of this team for the long haul. That’s a weird, slightly scary thought, but it’s sort of irrefutable at this point.

But why view Brandon Crawford’s emergence (?)/resurgence (nah) as a "bad" thing or even *a* thing? Let’s look at something much more exciting:

It’s not all about these two guys (the pitching has come around, too, sporting a 3.56 ERA since June 1st coming into tonight’s game), but it’s worth pointing out that these two guys have been THE guys. We know that, of course, but let us continue to marvel at HOW MUCH they have been THE guys. It’s fast approaching Bonds-Kent territory, not in terms of total production (LOL – comparing current player production to post-2000 Barry Bonds) but in how we view them and how opposing pitchers view that middle of the lineup.

The guy who put up 200 hits in KC (in the AL Central) after 1,000 PA in 2011 and the kid whose ankle was destroyed by a stupid "manball play" are now the stable forces of the Giants’ lineup. They’re not tearing the world apart with their hitting prowess, they’re simply being consistent. Thunderously, awesomely consistent. Again, again, again, recall that the Giants could not hit from 2005-2010 (around about June). I looked at the numbers and the team posted a .202/.188/.234 line in those five years. They were an embarrassment. They are no longer. They are, huzzah, totally average. And they have two totally non-average forces right there driving them.

It almost – almost makes you forget about the random parts surrounding them, including Pablo Sandoval’s inconsistency and Angel Pagan’s stealth slump. It’s a joy to behold and it’s a point I must continue to hammer home because really folks, remember this clearly, this has not been the status quo for a long, long time. The Giants can hit and this is the best the bats have been in a long time. You can either accept that and relish it for as long as it exists or hope it is a portent of a bright future. Either way, drink from the flagon of victory.

The Giants started the 2010 season 0-7 versus the San Diego Padres. Since that start and heading into tonight’s matchup, the Giants are 22-13 against this merry band of lacrosse players. They defeated them when it counted most (game 162) and have basically not looked back ever since. But it’s still the Padres. It’s still a division rival, and it’s still a tough team that seems to self-flagellate in terms of its roster construction every offseason. Every win feels like they toppled King Broseph and his band of surfers. Tonight was no exception.

I didn’t even talk about another great start by Ryan Vogelsong. Don’t you dare take this guy for granted. There is no precedent for what we are witnessing. Just like the offense, let’s take a moment to appreciate what this is: amazing.

You know what, let's talk about it, actually.

Real quick, though, let us never forget (for the rest of the night) that Melky Cabrera did this (h/t Grant Brisbee, SB Nation):

Meanwhile, Ryan Vogelsong did this: 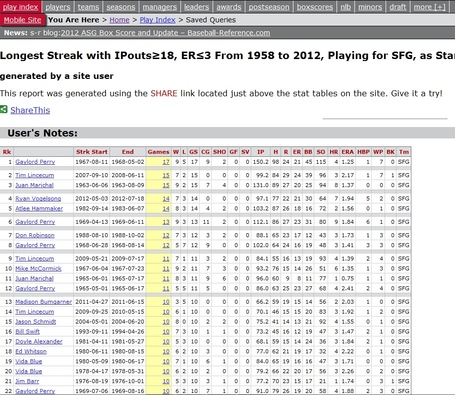 In case you can't read it (sorry for the reformatting), Vogelsong was #4 on the Giants' consecutive quality starts list since 1958. After tonight, he's tied for #2 with Tim Lincecum and Juan Marichal.

Let's face it: Ryan Vogelsong is Rocky. He's Rudy. He's Batman coming back after an eight-year absence if Batman had really sucked at being Batman that first go-around.

It feels like I've written about a lot of Ryan Vogelsong's starts this year and my primary takeaway is that he's unflappable, he's predictable, but dominant within that predictability. I have always understood why baseball pundits and coaches are friggin' obsessed with "consistency" -- BECAUSE IT IS REMARKABLE. The consistency is what's dominant, not necessarily the stuff or the final product. He gave up three walks -- not the end of the world, of course -- which is always the warning sign you keep looking for with Vogelsong, but he refuses to revert to shitty Batman. And maybe that's the key. Certainly, will cannot be quantified, but this transformation into one of the best players in the entire sport has to be a whole-body adjustment, which would include the mind.

My other takeaway from watching his starts and reading the post-game interviews is that this is the level of success Ryan Vogelsong expects now. This isn't some magical fluke ride that he's just enjoying, this appears to be a guy getting his big break because of hard work and then running with it once it's been achieved. My very lame comp (because I'm a dummy) is like Robert Downey Jr. and Iron Man. That was basically his last chance to become a mega star, given his age and all the years of drug abuse and what the general public thought of him because of that, and he went all in, totally committed himself to *being* the mega star and lo and behold, kids are wearing Iron Man masks now.

Matt Cain, Madison Bumgarner, and *Ryan Vogelsong*... you could switch those three around at any given time to decide who's most dominant -- as in, who is the best pitcher in baseball, and they keep surprising us.