Screw this. The story of the game is Tim Lincecum. There were additional innings -- "extra" innings, to use the proper jargon -- but before they wiped your brain clean, the story was Tim Lincecum. He pitched eight shutout innings, you know. He was dominant. He was the guy who we thought was before he was gone before he showed up again to clean up the mess that the guy we thought he was totally stood us up before what you just watched. There's no other way to describe it.

Early in the game, he was pumping fastballs. Fastballs, fastballs, fastballs. And it seemed like a good idea. For all of the talk about Lincecum's velocity, he hasn't been getting pummeled with his fastballs this year. The problem has been with the hanging breaking balls. Always hanging, always at the wrong time. 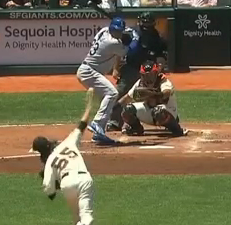 Over the top, like a trucker trying to win an arm-wrasslin' championship to save his son. This would explain why he was a golden god when he could throw 95. And it explains why the fastball wasn't the problem this year. Arm strength, which translated to a poor finish with his off-speed pitches? I can buy that, but that's not the same as a constant appeal to look at diminishing fastball velocity. His fastball wasn't the problem this year. And early in Saturday's game, he was using his fastball. It worked well. I'd like to see that strategy again.

If he starts getting knocked around with the fastball, switch it up. But we just watched three months of him getting knocked around with hanging off-speed stuff. Seeing as Lincecum had one of the worst first-halves of any first half in history, it couldn't hurt to try this one again, right? Fastball, fastball, fastball. It makes his hanging stuff a little less expectable.

I didn't approach Lincecum starts with dread this season. Over the last two months, I'd get all '80s movie, pumping my fists and cheering him on with the help of a rocking montage. Seriously, every game this year, I've gotten progressively fanboyier and fanboyier, thinking "THIS IS THE NIGHT. THIS IS THE NIGHT." Which, of course, made the inevitable meltdowns even more painful, more absurd.

I'm not sure if you can use first-half/second-half splits with total confidence, but there's something to be said about the mental compartmentalization of the different parts of the season. There's something so human about pretending you can lock an easily identifiable endpoint in a box and bury it in your subconscious. It's the second half. New Lincecum. Because screw that other half. I'm in.

My note from the first inning of tonight's game:

Which is to say, Sanchez needs to be in Fresno, catching every day. I came around. I'm on board. The extra single every ten days isn't worth the risk of having a stab-stab-stab Sanchez behind the plate. Remember when there was a Bengie Molina/Buster Posey controversy? I mean, not here, but in the vast expanses of the Giants-loving world? The pro-Molina people were scared that Posey was going to catch like Sanchez. Stab stab stab. Turns out Posey was pretty adept. But now we have the realization of that fear catching 40 percent of the games, and no one really cares.

So I was pleased that Sanchez had a pleasant offensive game tonight -- it was the perfect night to pick on him. I'd wager that Sanchez cost Lincecum three or four strikes tonight. Really, that's a guess, so don't read too much into it. But I"m pretty convinced that Sanchez's framing and stabbing costs the Giants strikes. And when he had a couple of singles, that made it easier to point out that he should be demoted.

Then he couldn't handle a wild pitch in the bottom of the ninth, and it almost cost the Giants the game. That would have made a demote-Hector sentiment seem reactionary.

Then he got the game-winning hit! Good for Hector! I like him, I really do.

But he needs to be in Fresno.

I'm pretty sure that without any offensive improvement, he could be a perfectly acceptable major-league catcher. If his defense improves, that is. The average-dependent stuff doesn't bother me that much. He's a catcher. If he hits .280 with a .300 OBP when he's 25, well, heck, that's okay. He's a catcher.

But the catching. Stab stab stab. It takes time. It takes repetition. It takes innings. I argued for Sanchez in the spring. Mea culpa. It's not the bat that I'm sour on -- he's still just a pup. I have a shred of hope that he can be a plus-offensive catcher someday. Forget the OBP -- he's got a decent idea of bat control in the majors at the age of a college draftee. But he needs to catch four days out of five instead of two days out of five. It's better for him, and it's probably better for the Giants.