Because I sloughed my duties off on a subordinate last night, I didn't get to analyze the Madison Bumgarner heroics. It turns out that Madison Bumgarner is a talented young pitcher. He's locked up for the next seven years for $7 million less than the Dodgers signed Yasiel Puig for. He's a year older than Puig. I will go on the record and suggest that I would not trade Madison Bumgarner for Yasiel Puig right now. Hopefully the Giants feel the same way.

There is still important analysis to do, though. Bumgarner pitched one of the best games of his life. He was this close to a no-hitter: 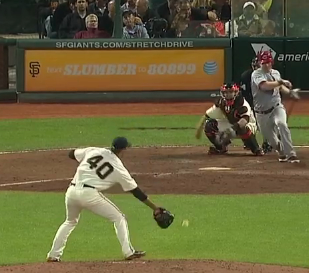 And because of this phenomenal outing, the Giants were excited. They got to exchange pleasantries and atta-boys after the game, but there are distinct factions within the Giants' clubhouse when it comes to post-game acknowledgements of Bumgarner's success. Here, then, is a very important breakdown of how various players and coaches congratulated Madison Bumgarner:

A single hand, above Madison Bumgarner's left pectoral. I see your left bosom, the hand says. It is a wellspring of power and victory, and I acknowledge it. It's physical contact, but it is not inappropriate. It's something a co-worker might do to you after you nailed a presentation to win the Jensen account. Unless you're a lady. Or especially if you're a lady, but then things would get weird and firey and lawsuity.

The simple tradition of the high-five. It's the most popular, as you might expect. This is a post-game greeting that's been drilled into your head since you were four or five. The only thing of note is the reappearance of Gregor Blanco, who was one of the first and last to greet Bumgarner. He didn't want to miss anyone, so he stuck around until the line came back to him. I'm starting to get attached to this guy.

That's him throwing a fin up because his nickname is "Great White Shark." You can tell he was doing it at someone else's behest (they said Sandoval on the broadcast. He's not entirely comfortable with the move, but he does it anyway and grins a sheepish grin. Yep. He's one of the best.

A relatively poor showing! I stopping playing baseball in high school, which is right about where the real ass-slapping begins. There has to be that tipping point where you figure that, welp, everyone else is doing it. Might as well kick back and enjoy it. It's a hell of a toboggan ride, and all that.

Of the above three, Romo is the most enthusiastic. Because of course he is. He's Sergio Romo, part mascot, part mythical creation, and whole relief god. I never thought I'd get so attached to a middle reliever. Get out of here with those Mike Trout offers, Angels! We're trying to run a business here!

And Ryan Theriot. He's just cold. Before he gets into the shot, he was kind of shaking like a chihuahua, unequipped to deal with the cold because of the cards evolution dealt to him. Bumgarner looked warm. Don't read too much into it. 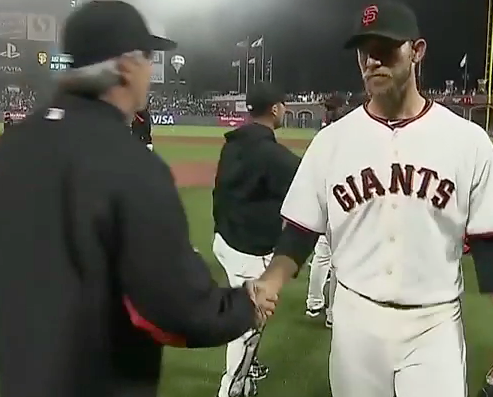 This is kind of the default coach move. I'm a little surprised that Flannery isn't with the slappers because he's not shy about it when he's on the clock.

The I'm Going To Shake Your Hand, Pull You In, and Then Slap Your Ass
Billy Hayes

This is like something he learned on a Nepalese mountaintop from a meditating monk. So deft. An amazing move. One minute, Bumgarner is getting the traditional coach handshake, and the next he's being pulled over like he's fighting Scorpion in Mortal Kombat. GET OVER HERE.

Here's a High-Five and Only a High-Five, So Be Happy With That … D'awwwwww Jus' Kiddin' Here's a Hug You Big Ol' Moose
Matt Cain

The best reaction comes from Matt Cain, of course.

The celebration ends with a grown man in a seal costume bumping fists with the hero of the day. It's worth noting that the only ass-slap given out by Bumgarner is in this exchange. It's with the back of the hand, sure. But it happened. And it probably means something.

This is clearly the stupidest article I have ever written, and there have been plenty of stupid articles around here. You are now dumber for having read that. But you can now go forth into the world, armed with this information! Share what you learned today! Make everyone around you dumber!

The important thing to remember is that Madison Bumgarner is good at throwing baseballs.