Share All sharing options for: An Eric Hacker Preview

I guess I'm supposed to write a Padres/Giants preview today, but, c'mon, you wouldn't want to read that. There are 43 more series against the Padres this year. If you're really eager, you'll get a chance. Or you could just make your own:

(Faceless lefty) sure will shut the Giants down, and I'll bet that (slap hitter) will get a big hit! Isn't it weird that the entire Padres team shares a bunch of names with (lacrosse players/characters from Dead Poet's Society/guys in your dorm who you wanted to punch)? Boy, I sure am sick of their (bullpen/bullpen).

And by the time you get tired of that format and move on, there will be new kids who haven't seen it yet. You are wholly replaceable. Remember that. Always.

He also appeared in two games for the Twins last year, and he had a lower ERA than Tim Lincecum has ever had in his career. In five innings. But you can't argue that the point isn't completely accurate. And for a while in 2010, he looked like a steal of a minor-league deal, starting off his year in Fresno with a bunch of strikeouts before getting hammered repeatedly. By "hammered", I mean "hit hard", but it was hard enough that you wouldn't blame a fella for drowning his sorrows, so I guess it could be both.

Hacker isn't a part of the future. He got the call because it was his turn to pitch in Fresno, and if the Giants need a 40-man spot back, they can almost certainly sneak him through waivers and take him off the roster. This is probably the only start he'll make in his Giants career. Apropos of nothing, here's a list of San Francisco Giants who have made exactly one start for the team. Now that Brian Powell is on it, but Brian Cooper is not because he made more than one start. Unless it's the other way around.

Eric Hacker will not create a controversy, even if he pitches a complete-game shutout. He is just passing through. The most important factoid about him is you can use an online Enigma Machine emulator to take the ten letters in his name and decipher the universe's hidden message: 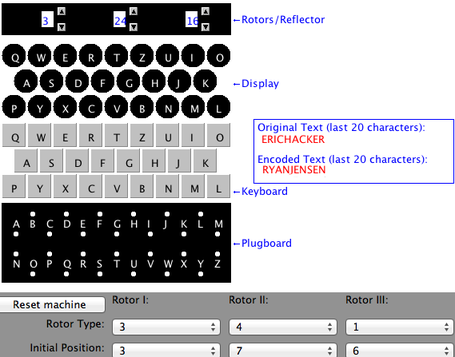 But he's starting tonight, and a new starter -- even for just a single game -- is always interesting, sometimes even in a good way. Not often. But sometimes!