The Giants swept a doubleheader on the road, and I don't especially care if it was against the New York Mets, the Houston Astros, or the Washington Generals. They scored runs. They prevented runs. Dingers were hit, and they were hit far.

The opening series of the season was miserable, but since then the Giants have won four straight series, including two on the road. And it seems like every time I start typing near the end of win, my attention is drawn to some ancillary player who had a nice game. Brandon Crawford had a great hit, and if he could be an actual hitter et cetera, et cetera. Nate Schierholtz sure looked good up there et cetera et cetera. Point out the guy who did well, wrap it up in a little bow of wishcasting, and repeat 75 to 105 times.

The problem, though, is that by doing something like that, I'm constantly ignoring Pablo Sandoval. He might be the easiest player on the team to take for granted. Too often he's an asterisk that you have to attach to a description of just how bad the Giants' offense was in 2009 and 2011.

A reminder: Pablo Sandoval was not included in the Giants' top-30 prospect list before the 2008 season, and he started in single-A. He jumped to the majors that season and eventually became the first homegrown Giants hitter to play in the All-Star Game since Matt Williams. He heroically sacrificed his playing time to let Juan Uribe and Edgar Renteria play in the postseason, and then he became awesome again when that was out of the way. He was the only good thing about the lineup last year. He was supposed to be only good thing about the lineup this year, other than the return of Buster Posey.

But what if he has a lineup around him now? If you didn't lose faith in Angel Pagan, you can see how he could be something of an acceptable leadoff hitter. And Melky Cabrera looks great, talking walks and hitting line drives. Up there I wrote "other than the return of Buster Posey" as if it was some sort of afterthought, but he's been even better than he was when he left. The Giants are getting to the point where if Aubrey Huff doesn't hit, they'll have to play Brandon Belt, right? And IF EMMANUEL BURRISS CAN KEEP HIS OBP OVER .340 AND IF SCHIERHOLTZ IS REALLY A LEFT-HANDED CARLOS BELTRAN NOW, AND IF IF IF IF…

Maybe it's not time for that kind of mania yet. But a double header with 13 runs will start rewiring neural pathways like that. For the first time in a while, I'm not entirely repulsed with the lineup other than Pablo Sandoval. It's all coming together pretty well. And now's the time to appreciate Pablo even more. Other than the obvious fella, it's hard to think of a hitter I've enjoyed watching more since Will Clark.

The official star of the doubleheader, of course, was Nate Schierholtz. He's at his best when he goes to the opposite field. Remember that the projection systems used to love the guy; it'd be swell if he decided to moon the computers this year, after they finally decided he wasn't all that. It's easy to get too excited about a guy after a week's worth of good at-bats, but it's also easy to ignore a legitimate improvement. Jayson Werth was a 28-year-old non-roster invite before he was an All-Star, just as Marlon Byrd kicked around until he was 29 before figuring out how to hit just a little bit.

Just, uh, forget that I wrote about trading Nate last week. It was late, I was hungry … ah, screw it. I'll just put the post in someone else's name. It wasn't my best work. Still thinking Nate's a fine fourth outfielder on a reasonably deep team. But if he were to figure something out in his age-28 season, it wouldn't be the most surprising development in recent baseball history. Heck, it wouldn't be the most surprising Giants-related development in the past 12 months.

Looks like Aubrey Huff had to leave the team for personal reasons. It's a little odd that all Bruce Bochy knows about it is from a single text, but best wishes to Huff if there's something serious going on. He's still the guy who crawled out of a dustbin to pick up MVP votes and homer against Tommy Hunter, after all.

And no, Lincecum didn't pitch especially well, but this seems a little harsh:

One scout on Lincecum tonight: "The numbers (5 IP, 1 R) don't reflect how badly he pitched."

His stuff was good. His fastball had movement, and it got plenty of swing-throughs. His control was just horrible, though. Here's how to describe his outing: He walked Ruben Tejada, and with two strikes, two outs, and the pitcher on deck, he threw this pitch:

That's a slider on a two-strike count just a little below the belt. Good gravy. The control is the problem -- the talk about his diminishing velocity is overblown. He has no idea where the ball is going. Sometimes that means it dips below the zone, where it turns into a walk or a strikeout. And sometimes it gets raked.

And if this play doesn't happen, we're reading a lot more of those annoying "What's wrong with Timmy?" articles tomorrow: 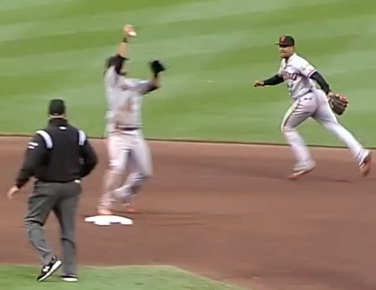 That's the kind of play you don't make unless you meditate on a Tibetan mountaintop for a few years. I'm going to check Crawford's Wikipedia page and see if there's something about that. And if there isn't, I'll put something in.

And today's taken-for-granted-player of the day is Madison Bumgarner. Ho-hum, just another 22-year-old with sterling command that you expect brilliant things out of every outing. I want to make a Tumblr site that matches Bumgarner's career with "This Date In Cliff Lee History." As in, when Cliff Lee was Bumgarner's age, he was walking four hitters per nine innings in high-A. Don't give up, champ! You'll make it some day!