There was a time, eight or nine years ago, when the Phillies and Giants had a rivalry. It was a thing. I received a vicious hate e-mail from a firefighter in Pennsylvania! That doesn't happen unless there's a hella rivalry.

Wait, that was eight or nine months ago? Holy crap. What happened? One week the Giants are in Philadelphia, taking two out of three, acquiring Carlos Beltran, and moving four games up in the NL West, and the next week Orlando Cabrera is hitting fifth. There's no rivalry when Orlando Cabrera is hitting fifth. That created an immediate detente with the Phillies and their fans, who felt a little sorry for us at that point. The rivalry was over. It was like Charlie Sheen hanging out at Lucas's hospital bed. That ain't no kind of rivalry, son.

But the Phillies and Giants had tense negotiations in the offseason, and I'm thinking the rivalry is back on.

Sabean: You need to break your second baseman, too.

Sabean: Nope, nope. We can't compete with that guy. You need to break him. Him and that first baseman. They both have to go. Have you looked into Ty Wigginton? He's like a right-handed Aubrey Huff. Maybe he could play left.

Amaro: This is insane. You're asking too much.

Sabean: You want a rivalry? The Mets are in the corner eating paste. The Nationals and Braves are obscenely boring. The Marlins are … I don't even know. Go ahead and make one of them your rival. I dare you.

Sabean: You also have one too many pitchers. That four aces thing is garish. Let Oswalt leave, and start working on crapifying that lineup. We'll get you a Fontenot to help when the time's right. Maybe the Fontenot. Oh, and start screwing around with your best prospect. These are our terms. Good day. I SAID GOOD DAY.

The Phillies acquiesced. And now they're basically the Giants. The rivalry is back on.

Oh, the smart money is still on Halladay/Lee/Hamels over Lincecum/Cain/Bumgarner for at least one more year, as much as it pains me to write that. But it's close, as are the differences between Worley and Vogelsong, Blanton and Zito. Without Utley and Howard, though, the Phillies have something like the offense we're used to watching. Both teams have a couple good hitters. Both teams have hitters who are perfectly okay. Both teams have Freddy Galvis, except one of them calls him "Emmanuel Burriss."

The problem with how the rivalry was reestablished, though, is that no one cares about a rivalry between two second- or third-place teams. No one's geeked that the Mariners and A's have already played 72 games against each other this year. And if the rivalry is to continue, both teams need to be successful. It's great that the Phillies are slumming it with the Giants until Utley and Howard are back, but both teams will need to win.

And the Giants should stay away from things like Orlando Cabrera hitting fifth. Unless the Phillies agree to something similar. Which they might have. They've had John Mayberry and either Laynce, Jayson, or Mayrk Nix hitting fifth for a lot of their games. That's a start. And you can feel Sabean's covetous eyes lingering over Juan Pierre in the leadoff spot. Makes things happen. The best part about Pierre being on the Phillies as that he's less likely to be traded at the deadline.

This isn't to say that the Phillies are a bad team now. And they'll get Howard and Utley back eventually, and then things won't be quite so even. But for right now, the Phillies are very, very Giantsy. Rivarly back on, dang it. 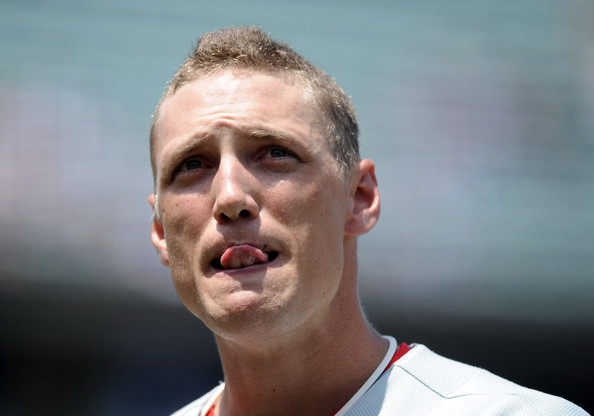 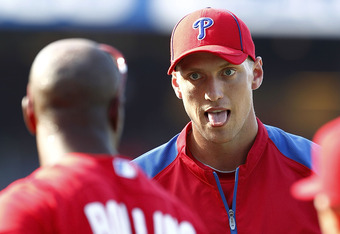 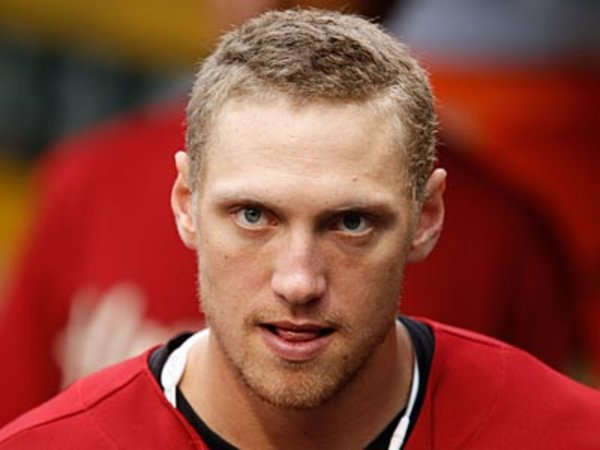 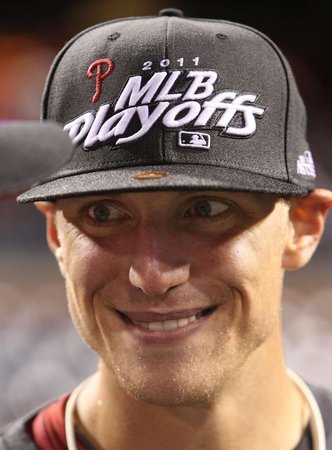 Hunter Pence is the hitter to watch. There's always a chance he could molt and shed his exoskeleton, and you don't want to miss that.

Pitcher to Watch
It's cute that the Giants have a history of success against Roy Halladay. A 7.23 ERA in the regular season, even, with more runs tacked on by way of Cody Ross in the NLCS. Eventually this will irritate Halladay, and he will destroy us all. Until then, though, it's fun to include that stat in the preview of every Giants/Phillies series that will include Halladay.

Prediction:
Phillies fans will appreciate this site a lot more once I make a peace offering, like this picture of Mike Schmidt shaking hands with Willie Mays.