That was the ol’ Coors Field special, but remastered George Lucas-style to incorporate the humidor. There was plenty of offense, but fewer home runs than usual. Ironically, the only bombs were Tim Lincecum and whatever ball was unlucky enough to meet the bat of Nate Schierholtz (I’m not forgetting Crawford’s blast, but it didn’t even crack 400ft).

Still, the offense showed up for a couple of innings and the Giants actually held the briefest of leads against the Rockies would-be ace of Jeremy Guthrie, who managed to work the Giants for three innings with nothing but a fastball and a bit of a curveball before it all went Coorsy for him.

Melky Cabrera continued to impress, Pablo Sandoval continued to put 2010 in the rearview, Gregor Blanco walked, Brandon Crawford had good at bats, Emmanuel Burriss had three hits (!) and even be-shingled catching icon Buster Posey made an appearance. All in all, can’t complain about the offense. Nooooope.

Emmanuel Burriss’s’s’s’s’s’s’s’s’s jittery throw in the bottom of the 4th inning (with Marco Scutaro running, sadly) opened another level of floodgates after the Giants starter was knocked out of the game the inning before. For a guy with little bat, a bad glove diminishes his value to the ballplayer-equivalent of a VCR.

Brandon Belt had a productive out, worked a walk, and made an amazing, rangy play at first base, so, of course Bruce Bochy replaced him with Brett Pill, which led to these babytown frolics:

Meanwhile, Angel Pagan saw three pitches in his first two plate appearances. He still swings like a starting pitcher… Melky Cabrera’s range wasn’t all that terrific in left field, though I admit he was probably exhausted from chasing down all those batted balls… Jeremy Affeldt looked positively crummy and after two appearances in this young season he certainly has justified the lunatic fringe’s derision of his 2012 contract.

In a game this awful, there’s a lot to point out and emphasize, and I’ve certainly covered quite a bit already, so, let’s just focus on the big issue here. It’s only 5 games, but for the second straight season the Giants begin 1-4. They have allowed 34 runs in those 5 games. Their gold standard pitching has looked more like aluminum foil colored with Hi-Liters.

However, there are some reasons to remain blindingly optimistic, besides the ridiculously small sample size: the 2003 Braves won over 100 games after allowing 41 runs in their first five games. Their starting rotation wasn’t nearly as impressive as what the Giants have. And, the Giants’ offense has shown more than just "signs of life", they’ve looked positively formidable at times. Speed, some selectiveness, and a bit of power.

But it’d be a lot easier to forget this game and how bad it was if a) it hadn’t followed a string of poor pitching performances (Zito’s masterpiece excepted, of course) and b) it wasn’t the worst start of Tim Lincecum’s career.

Thought I wasn’t going to mention that, right? 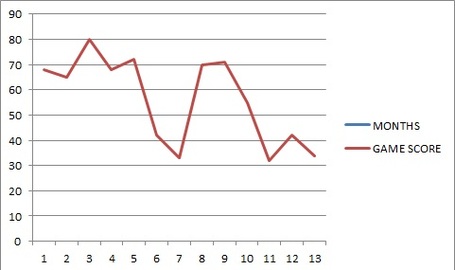 Bill James Game Scores for Lincecum from August & September 2011 and his two starts this year. He didn’t have a sharp spring either. His fastball velocity was up a bit (though I wonder how much that had to do with the Coors’ guns or just general FJBBS), but literally nothing else about him looked good (that includes the Tom Cruise-inspired haircut).

So, right away this season is a huge question mark. If Tim Lincecum doesn’t regain form and the pitching just blahs it up, there is quite literally nothing the Giants can do about it. They’ve invested everything in these arms and if they don’t show up, then the Giants go home early for the second straight season.