The Meaning of Matt Cain

Share All sharing options for: The Meaning of Matt Cain

There's a shift afoot in the public consciousness. Maybe it's been here all along, but I'm just starting to notice it. It's starting to look like the Matt Cain contract isn't just an exchange of numbers between two parties hoping to arrive at a fair midpoint, but it's instead a contract that means something, and not just in a baseball sense.

Both Monte Poole and Tim Kawakami have articles up that frame the Cain situation as something more than wins and losses. They aren't looking at what Cain's ZiPS projections are for 2016, or how many WAR he'll have over … whomever is the best right-handed starting prospect the Giants have now*. They're looking at the brand of the Giants, the state of the fan base, and how letting Cain go would mean something.

There's another side to the argument, and it consists of factoids that tickle the Vulcan tendrils of our brain. The list of $100-million pitchers who were worth the money is a short list. The two sides will argue in my head like those old Frosted Mini-Wheats commercials, where one side would be reading a book and the other one would be doing something like peeing in a sink. I'm not sure which side represents which.

I think I'm in, though. I think it's fair to say that the Cain situation has all kinds of hidden subtext and meaning. If the Giants don't sign Cain, they're saying …

None of that is offensive on its own. But they're saying more than that. They explained away the inactivity of the offseason by saying they needed to prepare for when the pitching became ludicrously expensive. They offered delayed gratification to us. Some of us threw a tantrum like a 3-year-old, and some of us were big boys and girls who folded their hands and politely waited. It's almost like there was a covenant between the ownership and fans: Wait patiently, buy your season tickets now, and we'll keep around two of the team's most popular players.

If that doesn't come true, there'll be a fallout. Because right now, the Giants sure feel like a team that should contend and spend with any team in baseball. There's a reason for this arrogance. 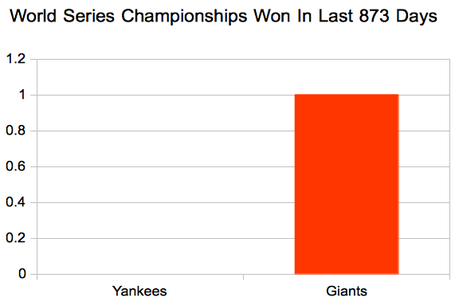 The Giants just won the World Series. They sell out almost every game. Where most of the teams in baseball are excited about their new TV deals given to them from their network, the Giants are the network (or at least 25 percent of it). There's a beautiful new ballpark in place that the team owns. The entire franchise is on an upswing like no other time in its San Francisco history. It feels like the Giants should be one of the unfair participants in an unfair system. They should be one of the teams that can bully the other teams, that can spend to win now because they know that they can spend to win then.

If the Giants let Matt Cain go because of money, they're saying: No, we're not one of those teams.

Maybe that shouldn't be such a shock. They're at $130 million right now, and that's not exactly frugal. I do think that was lost in a lot of the offseason conversation -- the Giants aren't cheap, they're just paying Barry Zito, Aaron Rowand, and Aubrey Huff $40 million this year, which is about what the Pirates team will make this year.

But those players will be gone -- Rowand and Huff after this year, and Zito after next. If the Giants … wait, holy … $40 million for those three players? I just … oh, god, no, this … I need a second, can someone bring back the pause for dramatic effect for a bit? I need to take a breather.

Better. If the Giants don't sign Cain knowing that those players are leaving, it's even worse than an admission that they aren't ready to play with the top-tier teams. It's an admission that they'll have trouble getting back to where they were, which right now is in the top ten of MLB payrolls.

And to bring it back to baseball instead of PR: It's a sign that we should all be comfortable with how Brian Sabean evenly distributes that money. How many Matt Morrises and Dave Robertseses can one Cain buy? Remember that time when the Giants lost out on Gary Matthews, Jr. and Juan Pierre? Why, with the money saved on Cain, the Giants could get both!

So there's a cold, logical reason to hope for Cain's return too. But it's the emotional, PR-driven aspect that will get the deal done. And I'm still confident that the Giants and Cain will reach an agreement, probably before the season starts. There's no reason for the Giants to be outwardly confident, or to say that they are going to devote all of their efforts to re-signing Matt Cain right away. Saying that out loud would cost them millions at the negotiating table.

But if they don't sign him, it'll mean something. Damn right, it will.