Let's be clear: Gregor Blanco is the center fielder of the future. His presence allows the Giants the opportunity to trade Gary Brown for someone to compete for the job at first base. For years and years, we'll all remember where we were when the Gregor Blanco revolution happened. The revolution will be televised. It will be sponsored by the Marines. Wouldn't you like to enjoy a nice, tall glass of join the Marines today? Gregor Blanco.

But for this season, the Giants will go with Angel Pagan. It's somewhat bizarre that Pagan was traded for Andres Torres, as I've always linked those two together. Both of them were perfectly ignorable fifth outfielders until they morphed into vintage Lenny Dykstra, with fewer delusions of grandeur and less liquid insanity. Torres and Pagan are both switch-hitting, plus-speed center fielders who have tweaks and rattles that send them into the shop regularly, just as you'd expect from a tightly wound, high-performance sports car. They can't help it.

Pagan, though, isn't reputed to be a great defender. He's supposed to be speedy enough, and it's not like he takes bernardian routes in center, but he doesn't have the surest hands in the universe. At least, that's the scuttlebutt. I'm curious to watch him play the spacious Mays Field outfield, especially when he's sandwiched between Aubrey Huff and Melky Cabrera. That will be amusing, but don't forget that early in the offseason, a lot of us were in some sort of nonsense-addled fugue, trying to convince ourselves that Melky wouldn't be that bad playing center. That would have worn off for everyone before May. There would have been tears.

So half of the Pagan projection will have to do with his defense. It's already not-Melky, which is good, but it's almost certainly not-Andres. We'll miss Andres. I miss him right now. He doesn't respond to my letters. I'd hand them to him personally, but 500 feet is a lot farther than you think at first. Stupid know-it-all judge.

But when Torres was out, I never got irate with the defense that Aaron Rowand played. It was perfectly fine. That's the bar I'm setting for Pagan in my head. It's been a while since a Giants player has made me cringe whenever a ball was hit to center. Marquis Grissom in his last year? Kenny Lofton? Dave Roberts? Right, Dave Roberts. It's been a while. I'm hoping the streak of competence will continue.

While I'd melt down my gold fillings and make a locket with my picture in it for Torres if it weren't for that stupid judge, I'll betray him and note that I'm much more optimistic about Pagan's offensive future. The Giants got the younger player in the deal, for one. Pagan is 30, and for three of the last four seasons, he had an on-base percentage of .340 or better. That's somewhat disingenuous because the year he dipped below .340 was last year, but I'm optimistic that he'll be a decent-OBP guy who steals bases at a good clip. I just might prefer Torres and Ramon Ramirez to Pagan, but it's close enough for me not to complain. I'm kind of excited to watch him.

Moderately worried about his defense, not especially worried about his offense. He'll be quite alright, I'd think, with one caveat: He'll be fine when he plays. The same thing would apply to Torres, so there's no sense of regret with that caveat, but Pagan has been on the DL six times in his career. He's had problems with his shoulder, quad, elbow, oblique, and … other. 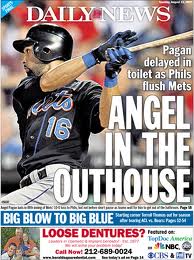 Baseball Prospectus has it listed as colitis. Whatever it was, it wasn't fun. But earlier last season, Pagan missed time with a freak tweak of the oblique, and that's the sort of injury that scares me with him. And if he's out, the Giants' backup plan in center is probably Melky. Which is bad. Dave Roberts bad. Maybe even worse.

Unless it means that the Gregor Blanco Era begins early. You'll remember where you were. But regardless of who the replacement will be, Pagan's health is the only thing that concerns me about him in 2012. When he's healthy, I'll look forward to the spate of triples.