Projections ain't so tough. You take a guy's career numbers, adjust for age and ballpark, tell a little story about him, and OH MY GOD WHO IS THAT 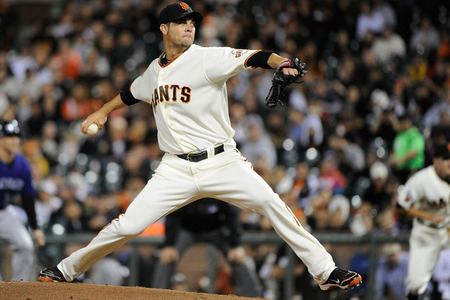 The most feared natural enemy of preseason predictions found in the wild. Ryan Vogelsong. To recount his story:

Why not? It's not like the real story is any less ridiculous. You've already read the real story 100 times. It still doesn't make sense. There's no point in putting yourself through that again. Remember, Vogelsong was a Giants prospect when the team played at Candlestick. He was on a short list of the worst pitchers to ever throw more than 300 career innings. Then something something something whatever poof something, he was an All-Star.

Which is great for the narrative. But horrible for the predictifying that is so, so important to our lives. Without the backstory, Vogelsong isn't such a mystery. He was a pitcher who commanded the ball well on both sides of the plate and garnered his share of swing-throughs. He probably isn't really a sub-3.00 ERA kind of guy, but the pitcher from last year was certainly a quality pitcher. His FIP was 3.67, which is exceptional for a team's fourth starter. His season wasn't a CGI invention of hard-hit outs.

But then think about the backstory. It was Ryan Vogelsong. C'mon. The story wouldn't have been nearly as effective if it were another long-forgotten prospect from a different organization. It's not like it was Dennys Reyes or Ryan Rupe coming back with a different organization. It was Vogelsong doing it for the Giants. It's that part that makes it seem most fake. Well, that and all of the other stuff.

The thing that sticks with me about the way he was effective last year -- the way he set up hitters and got them out -- was that he did it with command. He had a league-average walk rate of 3.1 walks per nine innings, but more than that, his whole strategy was based on nipping the corners of the strike zone. It was impressive to watch.

It was completely out of character, though. His career walk rate in the majors was 4.4 before that. Okay, whatever, guys can learn to throw strikes. It's not that crazy. But he walked plenty of hitters in Japan -- a league in which hitters like to swing -- and in 2010, while the Giants were winning the World Series1, Vogelsong was walking almost six batters for every nine innings he pitched. Even Jonathan Sanchez makes a scrunchy, disgusted face when he sees numbers like that. Vogelsong's control was a disaster in 2010.

Then he posted the fourth-best ERA in the NL.

Oh, and he's hurt. His back is tricky right now, and the Giants are hoping he'll be ready for Opening Day, but they don't want to rush him. So just when you were finished banging your head against the wall, thinking of all the different ways his season could turn out, remember that he's already hurt. But it isn't a shoulder or elbow pain -- it's something nebulous and indefinite. It's a lower-back strain that Vogelsong says is feeling better every day. Until it doesn't because backs are jerks.

So this is the toughest prediction of the lot, I'd wager. While it doesn't take much time to pick between a 90- or 100-RBI projection for Brett Pill, this one requires some blind-ass guessing. No one knows what Vogelsong is going to do, but there's no harm in looking like an idiot and trying to guess. Except for the looking like an idiot part.