The last time we had one of these, I coveted Alexei Ramirez without once stepping into a puddle of reality. It was fun. But I'm over that now that I know that Brandon Crawford's PECOTA projections have 18 combined All Star appearances! That makes up for Freddy Sanchez's comparables, which were just "Robocop before they robotted him up" repeated three different times.

This idea will also never happen. But it's February 9th. Live a little.

Where … where am I? Is that blood coming out of the corner of my mouth? What's that humming noise? Anywho, I'm okay with Zito as the fifth starter. If his name were Dulbroot Starply, he had the same career stats, and he made the minimum salary, I'd be pleased to take a shot with him as the fifth starter.

What I'm more concerned with is playing time for Brandon Belt. He could be the Giants' third-best hitter this year. Yet he isn't going to play. Considering that Huff got every benefit of the doubt last season despite showing up for spring training in poor shape, I don't think it's especially cynical to think he'll get every benefit of the doubt this season when he's in shape. Best shape of his life, I'd gather.

That means that Sabean needs to debengie the roster again. I think there's a small-yet-real chance that Sabean is just as frustrated as the rest of us about Belt's projected playing time -- that he secretly wished Huff would show up in March looking like he swallowed Don Zimmer, which would lead to Belt starting. But absent that turn of events, Huff will start, and he'll start a lot.

The Yankees have too many starters. A.J. Burnett is available, folks, and he can be allllll ours. But the Yankees aren't just looking to swap bad contracts. They'd like to get at least a little financial relief. The A.J. Burnett sweepstakes is going to come down to which team is willing to eat the most money for the privilege of A.J. Burnett.

The Yankees also need a left-handed DH. They have Andruw Jones, who is cool against lefties, but he has one hit against right-handers in the past five years, and that was against Tim Wakefield, who shouted, "I'm going to throw a fastball now, you crybaby" before he threw a fastball. Jones beat out an infield hit. That might or might not be accurate, but the point is that the Yankees would like a left-handed complement for their DH spot.

You can see where this is going.

The difference between the Huff and Burnett contracts is $21 million. No, the Giants aren't going to pick that up just to get Belt more playing time. But what is more playing time for Belt (plus a gamble on Burnett) worth? If you want to believe in xFIP, Burnett doesn't grade out poorly at all. One of his biggest problems is with dingerz; a move to San Francisco would do him well.

I doubt that there's a team out there that would take on $10 million of Burnett's contract over the next two seasons. Could be wrong, but I don't think the Yankees are going to save a ton of money on this one. They'll just want to save some. Their options:

It's the same thing financially as eating everything but $7 million and signing someone else. Depends on how much they want Huff compared to the other guys, I guess. Also depends on if a team will pay more than $7 million for the next two years of Burnett.

And is it worth $5 million to a) get Belt at-bats, and b) push Zito into a real-live competition for the fifth spot? The Giants wouldn't think so, I'm sure. And there's an even more important counterpoint to all of this: 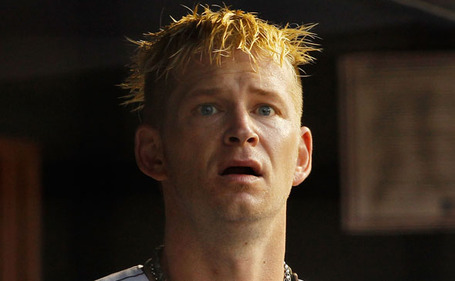 This isn't going to happen. But if I were in charge, I'd at least see what the Yankees are going to have to do in order to get rid of Burnett. Then I'd see if they had any interest in Huff. Other people are thinking thoughts that are just as crazy.

Also of note: Other fans laugh at us because this is the sort of stuff we have to go through just to pretend Brandon Belt could get at-bats.