Andres Torres signs with the Giants

Share All sharing options for: Andres Torres signs with the Giants

Every offseason, I write 50,000 breathless SHOULD THE GIANTS SIGN THIS PLAYER??? posts, and they're almost always stupid. But every seven years or so, the Giants actually do it. This is one of those times. And it's fantastic. According to Andrew Baggarly, the Giants have signed Andres Torres to a one-year deal pending a physical.

Awesome.The argument from two weeks ago went something like this:

Welcome back, old friend. You don't have to talk about those days in New York if you don't want to. Let's think about happier times. 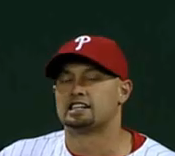 In an offseason in which the Giants could have come away with Shane Victorino, they brought back Andres Torres. I don't know what that means in wins and losses, but I know what it means in terms of good and evil.