An ode to Eli

Because there is nothing else going on in the world today, it's probably a good time to talk about Eli Whiteside.

Share All sharing options for: An ode to Eli

I wasn't going to write about this …

The Yankees claimed catcher Eli Whiteside on waivers. In their list of priorities, re-signingRussell Martin is not as high as addressing their pitching issues, so the Yankees continue to prepare for the possibility they might not have Martin next year. They like Martin -- a lot -- but will not overpay (in their eyes) to retain him.

… but there are a couple of reasons why I changed my mind. The first is that the above passage indicates the Yankees would be okay with a fallback plan of Eli Whiteside, which is great for all sorts of reasons. The second is that it's Election Day, and I can't think of a more trollingest post on a day like this than an ode to a backup catcher. Reminder: There is no (or shouldn't be any) political talk in the main threads. There's a FanPost over here for all of your political warbling if you so choose.

At the Parade -- capitalized because it certainly should be -- there were all sorts of random people-who-knew-people milling about the staging area, and they were lining up to bother Buster Posey, Pablo Sandoval, and Barry Zito. Eli Whiteside would get the occasional interloper, but not a whole lot. One of my better pictures of the day was of the Whiteside clan: 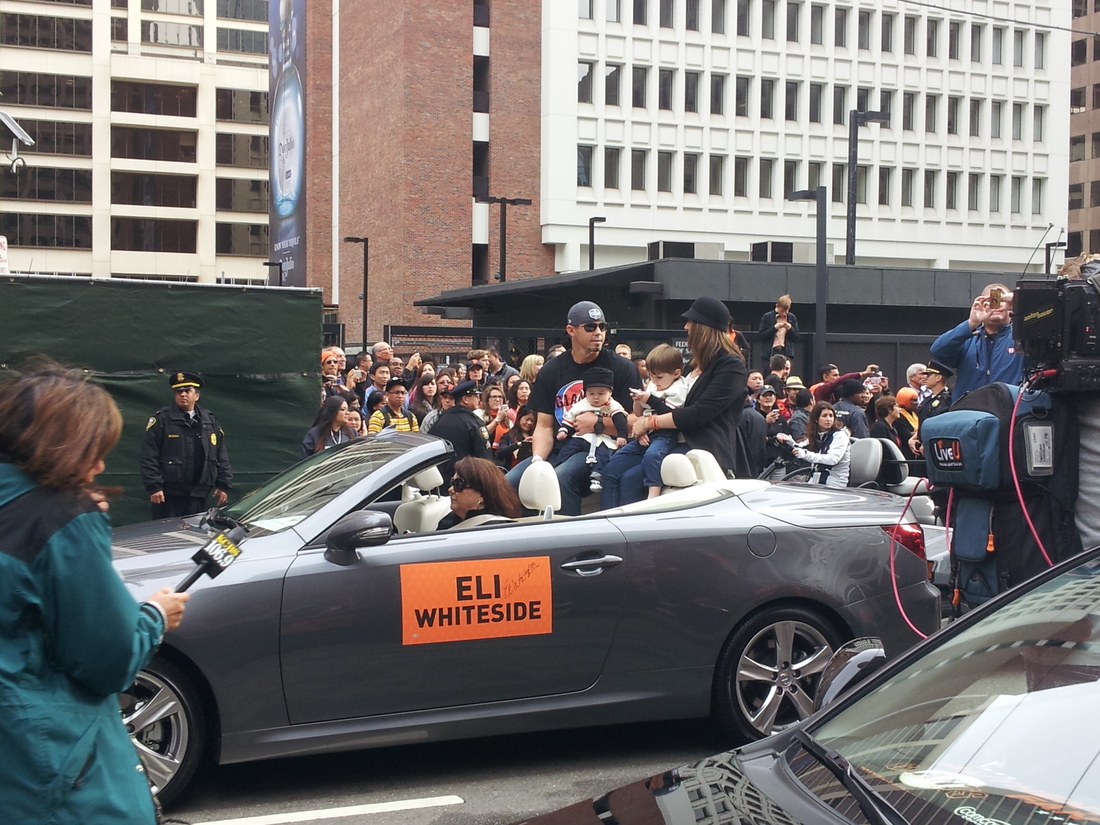 Noting that was one of the better pictures gives you an idea of what kind of photographer I am. I just loved that he was there, with his own car. He had 11 at-bats with the Giants this year. I'm not sure if there's an official judgement call or a cutoff point, but I don't think it would have been a surprise if Whiteside weren't there.

I was glad that he was, though. After serving as the backup catcher for a championship team, and after handling a lot of the starting duties last season, he graciously accepted a demotion before this season. I have no idea how gracious he was, really, but it seemed gracious from the outside.

Whiteside: Well, I guess it's back to Fresno for me, eh, Skeeter?

Whiteside: /packs worldly possessions in a handkerchief tied at the end of a stick

Just a guess. According to WPA, his best game as a Giant was July 14, 2011, when he had three hits, none of which led to a run, but he also reached on an error on a bunt attempt in the 12th inning, which allowed the Giants to blow the game open. That's poetry.

But it wasn't his best highlight as a Giant. Goodness, no. For starters, there was this:

That gave him 1 WAR that season, don't you know. There was also this:

That was two days after Posey's injury, and it felt like a big deal at the time. Maybe it was in an odd, healing kind of way.

There are also the peccadilloes of a guy, the kind that you only get when you follow a team for a couple hundred games every year. Those add up.

Eli Whiteside singing the words to George Michael's 'Faith' as he exitsthe field from pregame warmup. He knew all the words. #GiantsTalk

Things like that. For instance, did you know that he has grey hair? Like, totally grey? It's true. Little trivia like that is always fun. But Whiteside will be remembered as a Giant for two things: He caught the first no-hitter for the Giants in 33 years, and he wanted to chew Shane Victorino's nose off. First, the no-hitter:

He called every pitch. Jonathan Sanchez had a moment in the sun that few players will ever get, and Whiteside helped him there. Baseball is all about style points. Whiteside earned a bunch of them with that game.

And then there's the Victorino thing. You might know it from the GIF. Whiteside actually tackled Placido Polanco, not Victorino. But it was the bilious advance of Victorino that started the hopping in the first place. Forgotten notes from that game: Whiteside had a dinger before the fracas, and he also did this:

That's of secondary importance, of course, when it comes to hopping in front of Shane Victorino, hoping he charges. That's the ultimate Whiteside memory. And it's better than a whole bunch of Giants players past, present, and future will ever have.

It wasn't all Big League Chew and sunshine. I don't think I've ever been angrier with a backup catcher than I was on this play. But that's quibbling. If you were doing a Mt. Rushmore of Giants backup catchers, you would probably have trouble thinking of the other three. But you would probably start with Whiteside. Dude hits grand slams, catches no-hitters, and plays for championship teams. What more do you want?