Battle stations, everyone. And by "battle stations", I mean that poor, abused chair that you sit on when you're on the Internet ... so you're cool, actually.

B.J. Upton signed with the Braves. There is a strong chance that you didn't care a lick. You'll wait to find out if Upton is really a sub-.300 OBP guy, or if he's a molten blob of talent just waiting for the right cast, but you can't get too upset about him not coming to the Giants on an inflation-adjusted Rowand contract.

Denard Span was traded to the Nationals. There is a strong chance that you didn't care a lick. Span is good, and he would have been a great fit for the Giants, but he also cost the Nationals one of their better prospects -- a former first-round pick with a history of good minor-league performances. The Giants might have been able to beat the offer, but they were right not to want to. They can sign a center fielder still, and they can also keep the prospects, a luxury item with which they aren't exactly flush.

There are still other options. Michael Bourn is still on the market, and you know the Giants love their speed and defense. Nick Swisher in left and Gregor Blanco/other in center wouldn't be a bad way to go, at least for the short term. Josh Hamilton is ... alright, that one probably isn't worth bringing up.

But with each Upton deal, each Span trade, the threat level goes up: 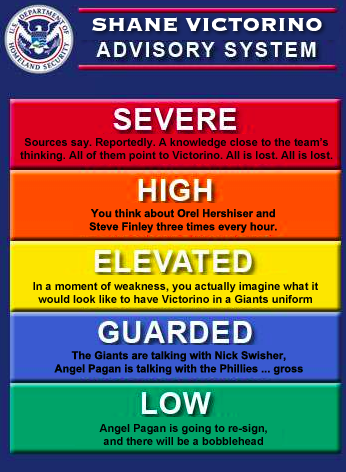 We're at yellow, I'm sorry to say. This isn't just an idle threat, either. From Jon Heyman:

At least seven teams -- the Reds, Indians, Yankees, Rangers, Giants, Rays and Red Sox -- are believed to be interested in Shane Victorino, one of four excellent center fielders in a strong but still developing market. Several teams are believed willing to go at least three years for Victorino, who publicly said months ago he was thinking about five years.

I'm also seeking five years, SB Nation, but at the major-league minimum. You hear me? Let's hammer something out.

No, Victorino isn't getting a five-year deal. But he's getting a deal, and I'm mortified the Giants will be the team in at the end. Victorino is 32, coming off a down year, which was his second down year in the last three.

(He's still kind of okay, though -- his defense in center is average, if a little stumbly, which isn't a bad thing. It's amusing! He's an excellent base runner, probably because he's punching opposing players in the junk and sliding into right field so often, everyone just kind of stays away and lets him do his thing. So he doesn't need to be a plus hitter to have value, and there's always the chance that his 2012 was an anomaly, not an aging cliff. If he comes at a discount compared to Pagan, he might be a better baseball move. But still repugnant.)

Goodness, it would be gross to have Victorino in a Giants uniform. Seeing as it's exceptionally likely that the Giants aren't going to another World Series in 2013 -- those are just the odds -- it would be nice to have Victorino around to blame. But that's the only function I can see from here.

Hahaha, just kidding. No, they won't.